We are slowly approaching the end of 2020, which will be remembered as the wildest year in history for cycling as a sport and the cycling industry in general.

Due to coronavirus social distancing measures, more people than ever before have decided to take up cycling as a way to stay safe, sane, and healthy amid the pandemic. Unfortunately, at the same time, COVID-based factory closures in China and the rest of the world created a huge shortage of bikes and cycling gear on the market. Not the best combination to have if you’re a retailer or a customer.

The question now is what does the future bring for cycling? How will the situation develop in 2021? Will bikes be back in stock? Will racing go back to normal?

We did some digging, as well as asked manufacturers and shop owners what they think, so we’re giving you our two cents and sharing some probable predictions.

The Impact of 2020 Coronavirus Pandemic on the Cycling Industry

It’s hard to say whether 2020 was a good or a bad year for cycling. It all depends on whom you ask. It’s safe to say that it was the best and the worst year at the same time.

The interest of regular people in cycling skyrocketed. When the coronavirus shut down gyms and public transportation, most people turned to bicycles as an alternative. In March, leisure-bike sales grew by 121% in the US. As a result, bicycle shops ended up with empty shelves by April. Similarly, sales of indoor trainers and rollers increased by 268%.

The industry is still recovering from this blow and shelves in many shops in the US are still empty. Will they go back to original stocks by 2021? It’s hard to say. 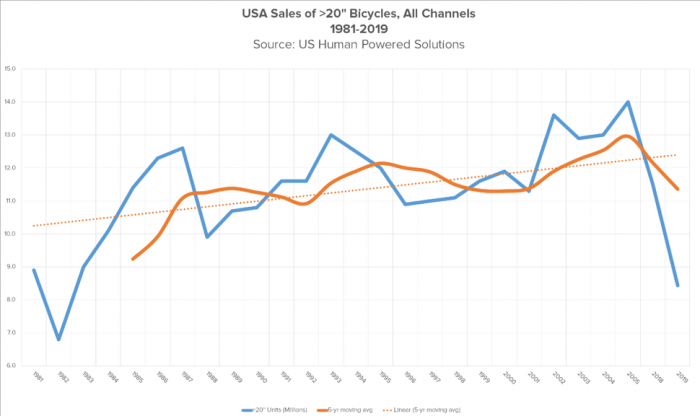 Bike sales and imports were at an all-time low in 2019 in the US, which made the cycling industry severely underprepared for the 2020 spike in demand.

In the same fashion, this was also a strange year for racing. Many races were completely canceled due to social distancing measures, whereas others were postponed.

Tour de France, Giro d’Italia, and Vuelta a España were all crammed into a time span of just 60 days. This was never before seen and caused massive changes in organization, sponsorship, and training.

In the end, I suggest we look at 2020 from a positive angle and conclude that it was a good year for cycling overall. We can say with certainty that there are now more cyclists than ever before on the streets of the USA, many of whom will continue cycling even after the coronavirus pandemic ends.

What Does 2021 Have in Stock for the Cycling Industry?

The one thing we can say with confidence is that nobody knows exactly what will happen in 2021. Several vaccines have been made by now, so a lot depends on the success of those vaccines against the virus.

However, after doing some extensive research, looking at the numbers, and talking to industry representatives and officials, we’re sharing our main predictions and expectations with you.

1. Bikes Will Be Back in Stock Again, But…

The most important question that both customers and retailers are asking and would like a speedy answer to is whether or not (and when) bikes will be back in stock again.

The 2020 bike shortage was one of the worst ever. According to Specialized executive vice president Bob Margevicius:

In September 2020, he estimated that we can expect another 12-14 months of bike shortages before the situation goes back to normal.

However, it’s important to note that things will go back to normal gradually, over time. Things will start to improve during the first quarter of 2021 and become better as the year progresses.

Therefore, don’t expect the shelves in bike shops to be magically full on January 1, 2020. But do expect them to be fuller and fuller as time goes by and manufacturers, distributors, and retailers reach their former capacities.

2. Retailers Will Start Including Smaller Brands

Up until 2020, many retailers relied on and stocked bicycles from the four biggest bike brands and their sister companies: Trek, Specialized, Giant, and Cannondale. This is bound to change in 2021.

The majority of retailers are already looking to bring new brands into their stores for the next year. This way, they will have a healthy ecosystem of competing brands under their roof, which will prevent complete shortages. If one brand is out of stock, another one will have bikes for sale.

This is not a new strategy, though. Around 30% of small bike retailers who are not associated with one of the four big cycling brands have been relying on this business model for years.

Therefore, according to some predictions, 2021 will be the year of smaller brands, many of which will probably gain new customers who are going to stay loyal to those brands in the future.

The number of electric bikes has been on a rapid rise for years. More and more people are opting for an e-bike instead of a regular bike because they allow non-cyclists to overcome common barriers that earlier pushed them away from cycling. You don’t need to be fit to ride an e-bike, you don’t need to suffer, and you don’t need to sacrifice time if you’re unable to go fast on your own.

We expect the number of e-bikes on the streets to become even higher in 2021. According to Statista, the size of the global market for electric bicycles is expected to go from $14.8 billion in 2019 to $20 billion in 2023. 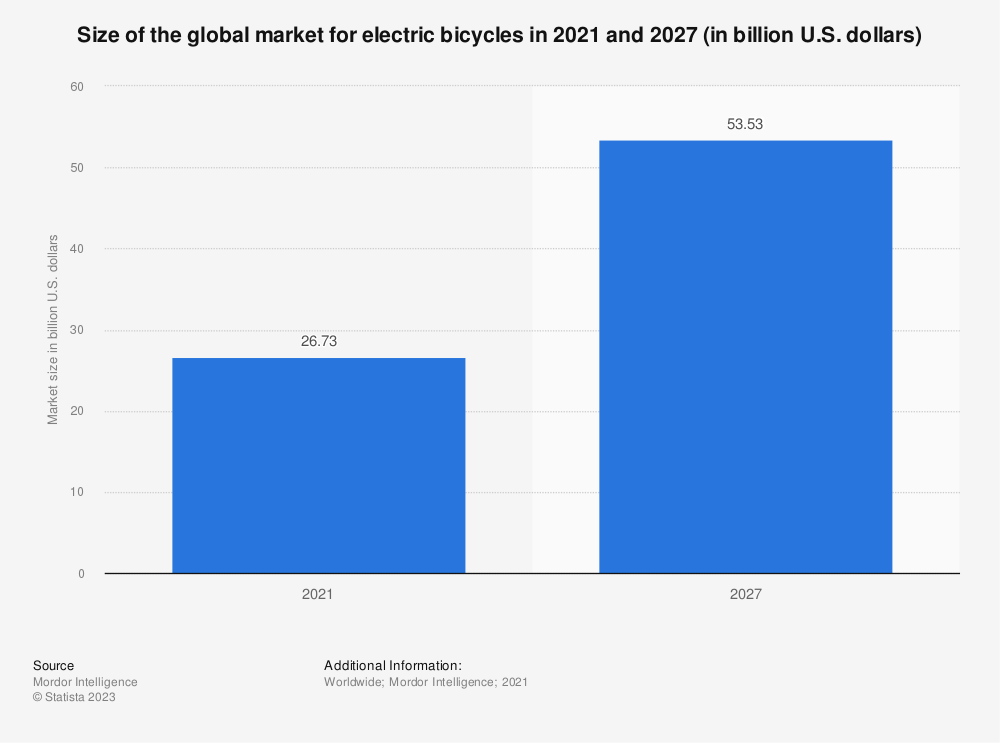 The E-bike market will continue to grow in 2021 and beyond.

A few facts that support this claim and these numbers are that e-bikes are becoming cheaper, lighter, more powerful, and faster. They’re also becoming very similar to regular bicycles thanks to more compact motors and integrated battery packs.

As an increasing number of people has replaced cars and public transportation with bikes in 2021, we expect to see more cargo e-bikes on the streets, which is the best car replacement around.

4. Bike-Sharing Gets Bigger and Bigger

Those who were fast enough and lucky enough to purchase a bike in March and April 2020 are now probably enjoying their new ride and will continue to do so in 2021. Those who weren’t, have two options: service the old, rusted bike in their garage or use bike-sharing programs. 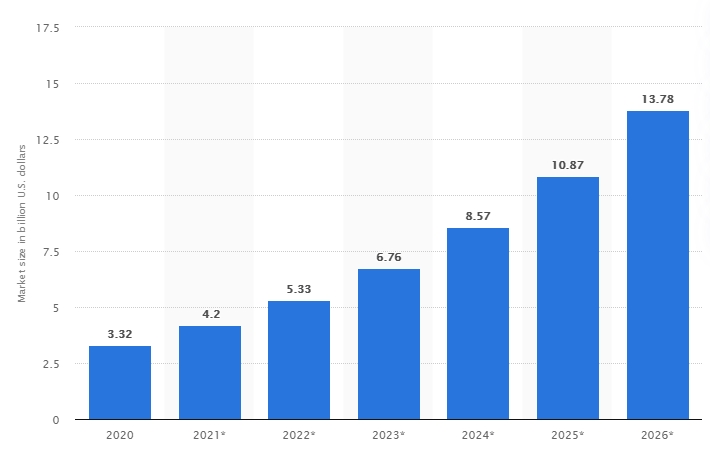 In 2021, most social distancing rules are likely to still be in effect, which means cycling is going to remain the number one transportation and exercise medium.

Instead of using public transportation or spending hundreds of dollars on gas, a lot of urban dwellers will simply use shared bikes wherever available. That said, local authorities in many cities in the US still have a long way to go before the demand for shared bikes is fully met.

After the UCI put many of the official races on hold and postponed others at the beginning of the 2020 coronavirus pandemic, professional and amateur racers turned to the world of Zwift Virtual racing.

The UCI has recently confirmed the first UCI Cycling Esports World Championships, which will take place on 8 and 9 December 2020. Men and Women elite cyclists from 20 National Federations will get a chance to race entirely virtually for the first time.

Just Everested, vEverested, whatever you call it, with @LukeRowe1990.
We had the idea when we knew the weather would be bad.
I take my hat off to anyone who’s completed it in whatever capacity, it was grim.

Many professional riders have also turned to the Everesting challenge to cope with the lack of races, which they completed virtually on Zwift. Mark Cavendish and Luke Rowe being just some of them.

The UCI racing calendar is now majorly back to normal, but we expect to see even more virtual races in 2021 as cyclists are becoming fond of this type of challenge. 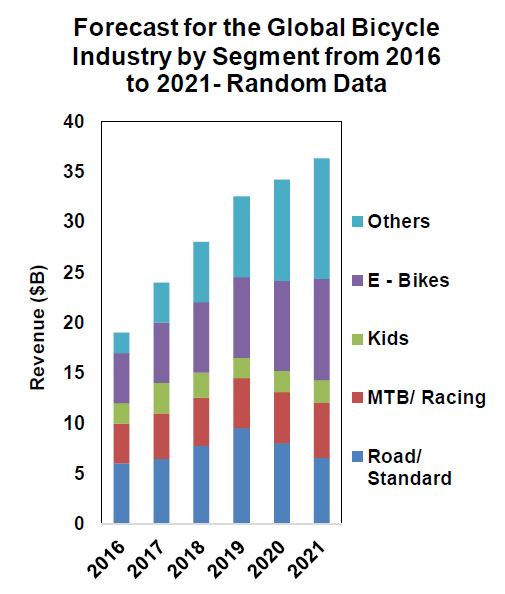 One of the reasons why we’ve mentioned earlier that you shouldn’t expect bikes to be back in stock at the beginning of 2021 is that the demand is expected to stay high.

Even though more people than usual have bought a bike in 2020, there are many of those who still haven’t. Some of them are waiting for their preferred brand and model to be back in stock, whereas others have placed preorders and are waiting for those to be shipped.

Additionally, sales of bikes under $200 grew more than 200% and front-suspension mountain bikes were up 150%. Therefore, we can expect recreational and entry-level bikes to stay in high-demand, especially those between $500 and $1,000.

So even though it will be easier to purchase a bike in 2021 compared to the previous year, you’ll still have to race other people who will want to do the same.

Though this will present a problem for retailers, customers, and the industry in general, we’re quite happy that the interest in cycling is not expected to wane.

Let us know your thoughts below

This Article Has No Comments

Be the first person to start the conversation by leaving a comment.