Gravel vs. Road Bikes – How To Choose?

The differences between gravel bike vs road bike are real, even though they’re hard to spot by an untrained eye. Keep reading as we delve deeper into the main differences and help you make the right choice.

Gravel bikes have been a hot topic in cycling circles for a long time. They’ve been the cause of a lot of debate, as some claim gravel bikes are no more than a passing fad, whereas others believe they are game-changers.

Whichever group you identify with, you can’t dismiss the fact that gravel and road bikes thrive in different environments.

If you’re still weighing in your options and trying to answer the gravel vs. road bike question for yourself, this guide will tell you all you need to know.

What Is a Gravel Bike? 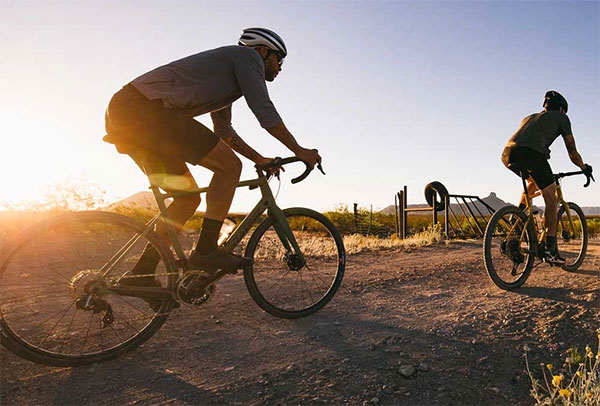 You might be asking, what is a gravel bike? Gravel bikes are versatile two-wheelers that perform admirably on pavement but excel when taken off-road. At first glance, they look similar to road bicycles. But at a closer inspection, it’s easy to notice some major differences.

Longer read: 8 Reasons Why Gravel Is the Hottest Trend in the Cycling World

Due to their wider gravel bike tires, more relaxed and stable geometry, and off-road-ready components, gravel bicycles are capable of navigating gravel routes, fire trails, dirt roads, and even singletracks.

We can view them as a marriage between road bikes and mountain bikes, taking the best feature from both of these categories. However, to achieve this blending, certain compromises had to be made as well.

As a result, gravel bikes are neither as fast as road bikes, nor as capable as mountain bikes. But they allow riders to do a little bit of both without having to own two separate bikes or needing to turn around when the surface changes.

See All Gravel Bikes on JensonUSA

What Is a Road Bike? 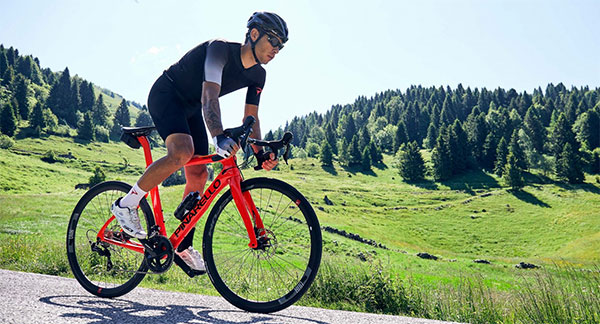 Road bikes, as you can guess from their name, are made for riding on smooth, paved roads. These are machines built for speed, with aggressive geometry, aerodynamic properties, narrow tires, and fast gearing.

While road bikes are capable of much more than they are given credit for (take the Paris-Roubaix race as an example), they still have significantly more limitations compared to gravel bikes.

The race type puts speed at the top of its priorities, whereas endurance road bikes blend speed with comfort, making them ideal for long-distance rides and commutes.

See All Road Bikes on JensonUSA

While undeniably similar in many regards, road bikes and gravel bikes differ in several crucial areas.

If you had the two side by side and you had to play the “Spot the Difference” game, we’d recommend taking a closer look at the geometry, frame, wheels, tires, components, and handlebar.

Here’s what we mean by it.

When it comes to the frame and geometry, most people would dismiss the gravel bike vs. road bike debate as unfounded, considering the two look almost the same.

However, if you compare the numbers, the angles, tube lengths, and shapes become obvious.

Road bikes usually have lightweight frames with thin tube walls and aerodynamic shapes, built to be stiff and reduce air drag. Their geometry is typically characterized by having a long reach and low stack, short wheelbase, and steep angles. This shape puts the rider in an aggressive riding position, making them more aero, and giving them better maneuverability at high speeds.

On the other hand, gravel bikes are pretty much the opposite. A gravel bike frame has a shorter reach and higher stack, longer wheelbase, higher bottom bracket, and slacker angles. This way, the rider takes a more comfortable, upright position. At the same time, the long wheelbase and slack angles make the bike more stable and easier to handle, especially in tight corners at low speeds.

A gravel bike frame is also typically heavier than road bike frames because of thicker tubes that can withstand more abuse. Moreover, most models have eyelets on the frame and fork that allow you to mount racks, fenders, water bottle cages, and frame bags, which you don’t get on road bike frames.

The easiest difference to spot when talking about road vs. gravel bikes are the tires and wheels.

Road bikes roll on 700c wheels with tires that are usually 23-25 mm wide. More recently, 28c tires have become popular as well, but that’s about as wide as the clearance on race road bikes allows. In addition to that, road tires are usually sleek, without knobs or treads, and the wheels have fewer spokes, making them lighter but also weaker.

On the other hand, gravel bikes come with 700c or 650b wheels and tires that are usually between 35mm and 47mm wide. Gravel bike tires resemble MTB tires in that they have knobs and tread patterns that increase grip on loose and soft surfaces such as gravel, dirt, or sand.

Nowadays, all the best gravel bikes come with tubeless wheels and tires, since punctures are a lot easier to get when riding off-road. A tubeless setup also lets you ride at lower pressures without risking a pinch flat, meaning you can increase grip by widening the contact surface.

Want to learn more about tubeless tires? See our guide on how to choose them (and to get a better idea about what they are).

Both road and gravel bikes are compatible with road groupsets. However, the number of gears and gear ratios are not the same.

Having 22 or 24 gears, road bikes have smaller jumps between individual gears, which means that it’s easier to find the right cadence in a group ride or on a climb. Gravel bikes usually have a wider gear range that’s more suitable for tough and gritty climbs, but the jumps between gears on a 1x drivetrain are more significant.

Gravel bicycles also usually have rear derailleurs with a clutch that eliminates chain slap and prevents the chain from dropping if you hit a bump too hard.

In terms of braking, the road bike vs. gravel bike dilemma is almost inexistent. Disc brakes are a given on any gravel bicycle because they provide stronger braking power, more precision, and better modularity. However, disc brakes are slowly becoming a standard on road bikes as well, with more and more manufacturers opting for discs instead of traditional rim brakes.

Even though both handlebar types look pretty much the same, road bike handlebars and gravel handlebars have unique shapes and properties.

Road bike handlebars are typically narrow with longer reach and deeper drops and come attached to long stems. This allows the rider to get in an aerodynamic position and reduce air drag.

On the other hand, gravel bicycles have slightly wider handlebars with flared dropouts that are often attached to shorter stems. This achieves better maneuverability and control through tight corners, and the short reach puts the rider in a more upright position.

The flared drops and wider handlebars have another advantage — they provide you with more room to attach a handlebar bag, which is a popular way to carry necessities among bikepackers.

As it has probably become a bit clearer by this point, road and gravel bikes shine in completely different conditions.

Even though road bikes can handle some mild off-road riding, such as hardpacked gravel roads, they are best suited for smooth tarmac roads. Their unique properties allow them to go fast, achieve high average speeds, and cover large distances while reducing the wattage required to do so.

While gravel bikes do pretty well on paved roads, they show their true benefits once you take a detour and start riding down a loose gravel path or a dirt road. The reason why gravel bicycles have become so popular is that they allow you to combine paved and unpaved roads in a single ride, without making too many sacrifices in terms of speed or off-road capability.

What is the difference between a road bike and a gravel bike?

A road bike has narrow tires and aggressive geometry, which makes it perfect for riding fast on smooth, paved roads. A gravel bike has wider tires, more upright geometry, and wider gear rations, meaning it’s capable of tackling both paved and unpaved roads.

Can a gravel bike be used as a road bike?

Yes, you can use a gravel bike as a road bike with a minimal reduction in average speed. Gravel bike tires are slower than road tires on the tarmac, but not significantly so. If you swap them with road-friendly tires, the differences in speed between a gravel and road bike will be minimal.

It wouldn’t be correct to say that gravel bikes are better than road bikes because both types have unique advantages and disadvantages. Road bikes are better for rides on smooth tarmac, but gravel bicycles are a better choice for multi-surface riding on paved and unpaved roads.

Why are gravel bikes so popular?

The main reason why gravel bikes have gained so much traction is that they allow you to have two or even three bikes in one. You can use them for group road rides, gravel rides, and even ride some light singletracks and trails. Therefore, they are very cost-efficient and incredibly fun.

Choosing whether to purchase a road or a gravel bike without knowing all the ins and outs can make your head spin.

Hopefully, our guide has made your gravel vs. road bike dilemmas a bit less mystical.

Road bikes are here to stay since it’s very hard for any other type to match the raw speed and performance they provide on the open roads.

However, in recent years, gravel bikes have established a firm position as do-it-all workhorses that put the n+1 formula of the ideal number of bikes to the test.

Therefore, if you plan to keep riding on perfectly smooth paved roads, a road bike is all you need. But if you want to explore more off the beaten path, take scenic detours, and enjoy some time away from traffic, a gravel bike is worth investing in.

Your feedback is important to make our reviews even more precise!
Write your review on [email protected]r.com