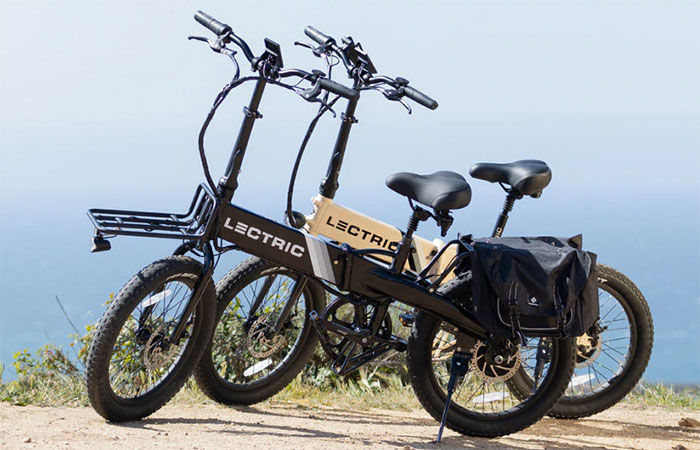 Lectric XP Lite offers much more than you would expect at the sub-$900 price point. At that level, it can be difficult to find a nice road bike. But in the Lectric XP Lite, you will get a folding e-bike with 2.4” tires, an LCD display, and a 48v battery with up to 40 miles of range.

With its lightweight frame and host of features, you’d expect the XP Lite to cost a lot more than it actually does.

The Lectric XP Lite is a true standout in the e-bike market. You can’t find any other 48V e-bikes at this price point, making the XP Lite one of the most affordable e-bikes. Its folding frame weighs just 46 lbs including the removable battery which can power the bike up to 20mph. With a twist throttle, the Lectric XP Lite is a Class 2 e-bike with a handful of valuable features, as well as the ability to fold on the go.

Here are some of the highlights of the Lectric XP Lite, a powerful, lightweight, and affordable folding e-bike. Lectric bikes used almost the same design for the XP Lite as their widely-popular XP 2.0, though with a few significant changes.

Firstly, the XP Lite is lighter weight – hence the name – coming in at just 46 lbs and making it one of the lightest folding e-bikes. Second, the XP Lite uses slimmer 2.4” Chaoyang or CST tires rather than the fat tires on the XP 2.0.

This sacrifices a bit of off-road capability and overall comfort, but it also increases handling and cornering speed, reduces weight, and creates a smaller frame when the bike is folded and packed away.

The Lectric XP Lite measures just 35” x 18” x 27.5” when folded, making it one of the lightest and smallest folding e-bikes.

This makes it even more impressive that the XP Lite houses a powerful 48v battery. The entire frame folds almost right down the middle, which makes it easy to pack the frame and carry it into the office, up the stairs, or onto the train.

Because of its smaller and lightweight design, the Lectric XP Lite has a relatively low payload capacity of 275 lbs making it suited for smaller riders and little additional weight. However, 275 lbs is still plenty for most people, especially when you consider the XP Lite’s intended use, and that is commuting rather than hauling 50 lbs of groceries.

One of the biggest sticking points of the Lectric XP Lite is its single-speed drivetrain. This means that you won’t be able to shift gears, which can be hard to adjust to on hilly terrain. However, the 48v motor provides plenty of power to crest those hills, though the pedaling (or lack thereof) may feel awkward.

This is one of the small changes that add up to make the Lectric XP Lite the lightest and cheapest folding e-bike. With both pedal assist and twist throttle, you won’t get stuck on any hills, even if you only have a single gear.

But thankfully, this will only be an issue on very bumpy pavement or off-road trails. A suspension seatpost is a simple and affordable add-on that you can use with the XP Lite to help smoothen out the ride.

Despite the modest price of $899.99, the Lectric XP Lite has many of the same premium features that you will find on high-end e-bikes. 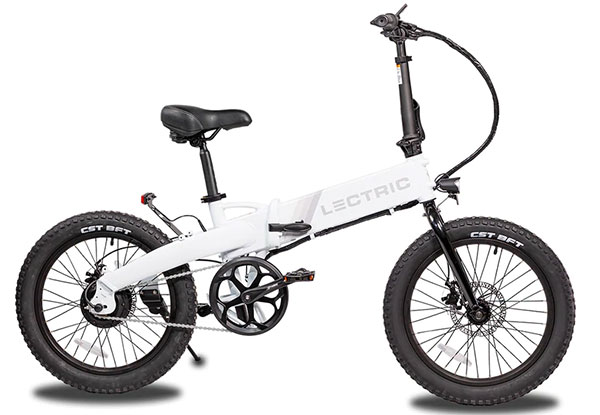 Looking at the bike, it’s hard to say that this is an electric bike. The battery is hidden (but removable).

As we’ve mentioned, one of the standout features of the Lectric XP Lite is its 48v battery which is nearly impossible to find at this price point. For $900, most e-bikes are stuck on 36v batteries which produce significantly less power than 48v batteries. Even with a 48v battery that produces 300W (720W+ peak), the Lectric XP Lite can still motor up to 20mph using either pedal assist or the throttle.

Level 1 provides the longest range at a speed of 6-7mph, while Level 5 can take you up to 15 miles at 17-20mph. Using the throttle only, you can get an impressive amount of distance out of the XP Lite, going up to 15 miles at 20 mph – that is more than enough power, range, and options to get you through your daily commute.

In this Lectric XP Lite review, we’ve learned that the XP Lite is a Class 2 e-bike with a top speed of 20mph. The entire battery is removable, and there is an external charging port located on the downtube.

There are even interchangeable spare batteries that can be removed or installed in seconds, doubling your range in any case. This is the simple and easy solution to forgetting about range concerns on the Lectric XP Lite.

Lectric XP Lite is one of the most impressive offerings in the e-bike space. At $899.99, the XP Lite is the most affordable folding e-bike that is also lightweight and fun.

With 2.4” tires, powerful disc brakes, and IP-65 rated components, the XP Lite is designed to be the best commuter e-bike in all-weather conditions. You can also take the bike around town, or load up the additional rear rack with up to 55 lbs. of carrying capacity.

The 48v motor truly makes the Lectric XP Lite stand out, as you cannot find another folding e-bike with this much power at this price point. With a 15-40 miles range, pedal assist and throttle options, and 300W of power, the XP Lite will give you everything you need on the flats and the uphills.

The Lectric XP Lite is safe, fun, and effective – and you can get it all for the low price of $899.99. For beginners in the e-bike market, or for those looking for a cheap electric commuter, the Lectric XP Lite has it all. Best of all, the bike is available in four different colors, so they have something for everyone!

Get From Lectric eBikes 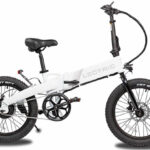 Get From Lectric eBikes