Charge City is an electric city bike with a 50-mile range and 20 mph top speed. It has all the features you’d expect in a high-quality city e-bike, but it is also unique.

Charge City includes folding handlebars and pedals for easy storage, and it is nearly 20 lbs lighter than comparable city e-bikes.

The full Charge Bikes lineup consists of four electric bikes from commuters and hybrids, to city bikes and off-road e-bikes.

All Charge e-bikes have a 50-mile range and 20 mph top speed, plus a range of important features.

For example, each Charge bike, including the Charge City e-bike, comes with fenders, kickstands, lights, and cargo racks.

Compared to other city e-bikes, the Charge City is lighter and more portable than its competitors. Let’s take a closer look in this Charge City e-bike review.

The Charge City specs cover an impressive array of features and accessories that you’d be hard-pressed to find on comparable e-bikes. When you factor in the folding handlebars and pedals, plus unique accessories like the automatic tire pressure sensors, the Charge City truly stands out.

Next, we’re going to run through the list of Charge City specs, as well as the all-important Charge City accessories.

See the Specs on Charge Bikes It might not look so at first sight, but the City is incredibly lightweight.

Made from lightweight and durable 6061 Aluminum, the Charge City e-bike weighs just 45 lbs including the battery.

Most comparable electric city bikes weigh upwards of 60 lbs, making the Charge City one of the lightest city e-bikes.

This makes the Charge City ideal for easy transport and storage, especially for riders who live in the city, use a train or bus, or store their city bike in their apartment.

Charge City e-bike components include the 7-speed drivetrain and mechanical disc brakes with 160mm rotors. The crankset has 38T which is standard for a city e-bike and a 14-34T cassette which offers a wide range for climbing and commuting.

The Bafang motor is housed inside the Charge City’s rear wheel which is a 700c, 36-hole double wall rim.

Offering the most puncture protection, Charge City e-bike has Goodyear Transit Tour 700 x 40c puncture-resistant tires that even include reflective sidewalls to help you stay safe, day or night. Charge City comes with an impressive set of electronics that is consistent throughout the Charge bikes lineup.

The City has a 250W Bafang hub drive motor with 45 Nm torque, with five pedal assist levels, and a throttle. Power is delivered through the 36V, 11.6 Ah (418Wh) removable battery that can complete an 80% recharge in just a few hours.

The motor assists up to 20 mph, while the throttle is thumb-operated. You can view all the electronic features of the Charge City through its easy-to-read display which is attached to the handlebars.

Charge City e-bike comes in two sizes for the standard frame: small and large. Here are the rider heights that Charge recommends for each frame size:

Charge City is also available in a low-step frame design, which only comes in one size, suitable for people in the 5’1” – 6’ range.

In this Charge City e-bikes review, we’ve looked at the details of one of the most unique electric city bikes.

With its folding frame and pedals, the Charge City e-bike folds in a way that few other bikes are capable of.

At just 45 lbs, the Charge City is one of the lightest city e-bikes, yet it doesn’t skimp on any of the features you’d hope for in a city bike.

With integrated fenders, lights, and a rear rack, you can commute and run errands in all sorts of weather on the City. The puncture-resistant, all-weather Goodyear tires should give you confidence in the rain or while riding through a construction zone.

At an affordable price point, the Charge City e-bike is an appealing option that could easily replace your car. You’ll have plenty of room to carry groceries or cargo, and hills won’t be a problem thanks to the Bafang motor and five levels of pedal assistance.

Get From Charge Bikes 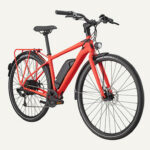 Get From Charge Bikes