Electric bike motor is a complicated piece of technology, yet it makes our lives so much easier. E-bikes are one of the fastest-growing sectors in cycling as they permeate every part of the industry.

Nowadays, you can find electric bikes – or e-bikes – for almost any bike you can think of: mountain bikes, hybrids, road bikes, commuters, and cargo bikes are just a few examples.

The beauty of e-bikes is that they make cycling more accessible to everyone. Whether you are a total newbie or want to try out a new discipline, an e-bike can help boost your confidence on the bike. With an e-bike, you won’t have to worry about getting stuck walking up a climb or bonking 20 miles from home.

E-bikes are fast, comfortable, and fun – but have you ever wondered how they work?

The myth that e-bikes are motorcycles has long been debunked – electric motor bikes just give you a boost. You’ll never feel out of control, or like you’re piloting a motorcycle down city streets.

Electric bikes have never been cheaper or more popular, and many come with their own special features and accessories that regular bicycles don’t have. For example, many cargo or commuter e-bikes come with integrated lights and luggage racks.

But so many of us have wondered: how do e-bikes actually work? Some electric bicycles have throttles while others have pedal-assist power. Other e-bikes have multiple levels and gears while others have one. There are different motor sizes, batteries, and ranges for all sorts of e-bikes, too.

In this article, we’re going to teach you how electric bikes work, how many different types of e-bike motors there are, and what kind of e-bike might be best for you.

How do Electric Bikes Work?

Technically speaking, an electric bike is a pedal bicycle that has an electric motor and battery which provides power assistance. This assistance can come in the form of pedal assistance or a throttle.

Some bikes may brand themselves as “e-bikes” but include a throttle that doesn’t require you to keep pedaling. In most countries including the USA, this disqualifies the bike from e-bike status, legally speaking.

All electric motors for bikes have a speed limiter or the point at which the motor stops providing assistance. This can vary from e-bike to e-bike and is a major factor in delineating between the three classes of e-bikes. Most electric bike motors are speed-limited to anywhere between 15 and 28mph.

The assistance from electric bicycle motors can be controlled on most e-bikes. Many will provide 3-7 different levels which you can control via the handlebars, just like a bike’s gearing.

There are a few different styles of electric bicycle motors including mid-drive, direct drive, and geared hub. Here, we’re going to run through each style to see how they actually work.

How Different Kinds of Motors Work 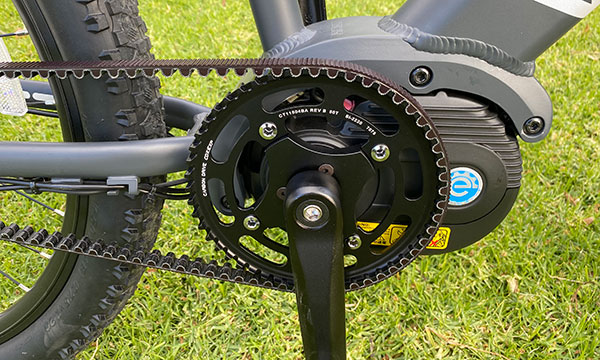 Overall, a mid-drive motor e-bike offers the best sense of balance and control because of the positioning of the motor.

Mid-drive motors are great for climbing and low cadence riding because you won’t have to worry about the motor getting bogged down. Since the motor is at the pedals and not the wheel, you will avoid overheating the motor as you might experience with a rear hub e-bike motor. 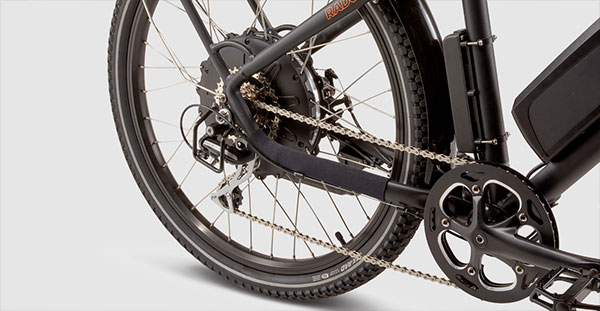 When it comes to direct drive motors, they are the easiest to spot – they are the largest and the heaviest motor type.

Direct drive motors are also called gearless hub motors. They are located in the hub of the rear wheel, and use magnets instead of gearing to transfer forces.

One of the best parts of direct-drive e-bike motors is that they are almost silent. With no gearing to click around, there is no gear noise coming from the rear hub.

However, direct drive motors are great for low speed and high torque riding like you would have on busy commutes or crowded bike paths. Direct drive e-bike motors work best at high speed and low torque, which means they operate best once they are up to speed.

If you’re looking for an e-bike motor that is best for hills, go with a geared hub motor rather than a direct drive motor. 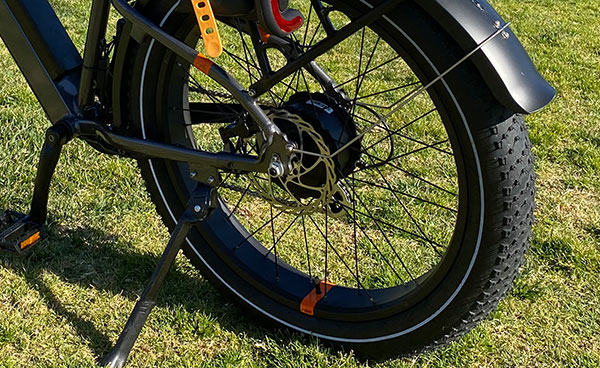 Hub motors are located in the center of the rear wheel of an e-bike. The power from the battery is delivered through the wheel rather than the pedals or cranks like other e-bike motors.

The way a geared hub motor works is within the rear wheel’s hub itself. There is a system of gearing – hence the name – that transfers the forces from the motor to the hub and ultimately the wheel.

Geared hub motors are the most common type of e-bike motor, and they are often the least expensive. Budget e-bikes usually have geared hub motors, though they do not sacrifice a significant amount of quality compared to other electric bicycle motors.

Better at low speeds and high torque, geared hub motors are typically better for Class 1 and Class 2 e-bikes which have a maximum assisted speed of 20mph.

One of the biggest downsides of e-bikes is their weight. In addition to its normal weight (frame, wheels, components, etc.), an electric bike also has a motor and battery.

Unfortunately, e-bike motors and batteries are quite heavy, so most e-bikes weigh upwards of 35 lbs.

E-mountain bikes and hybrid e-bikes with luggage carriers and wide tires are some of the heaviest types of e-bikes, sometimes weighing in at more than 50 lbs. It can be difficult to pick these bikes up off the ground, let alone carry them up the stairs or lift them into the back of a car.

E-bikes are substantially more expensive than non-e-bikes, and it can be difficult to find an e-bike for less than $500. The cheapest e-bikes are small folding electric bikes and lightweight commuters.

At the other end of the spectrum, there are full-suspension electric mountain bikes, for example. These machines can cost upwards of $5,000-6,000 for the base model.

That said, e-bikes are built to last, and the motor and battery won’t run out will other electronics. Will basic upkeep and necessary recharging, an electric motor for bikes should last many, many years.

Some cyclists are nervous about trying e-bike motors because they think they will go too fast. If you’ve only ever ridden at 11-12mph before, then going 25mph on an e-bike can certainly be scary.

The world moves faster at 25mph than it does at 12mph, and you’ll have to react to cars, pedestrians, and corners in half the time. Of course, you don’t have to go 25mph all the time, so you shouldn’t be afraid to try an e-bike.

As scary as it might seem to ride an e-bike at 20+mph, remember that the motor is only activated with pedal assist and you’ll always have the brakes at your fingertips. As soon as you stop pedaling, the motor will cut out. It’s pretty much impossible to go careening out of control because of an electric bicycle motor.

There are a few numbers that you will see being thrown around with e-bikes: Watts (W), Volts (V), Amp-Hours (Ah), and Watt Hours (Wh).

Watts (W) – a measure of power in the e-bike motor. You have probably heard of power and power meters in bicycles, and this is the same concept. Some e-bikes have a 250W motor, which means that you can add up to 250W of power to your pedaling.

Amp-Hours (Ah) – this refers to the capacity of an e-bike battery, such as a 12Ah battery. The higher than the number of Ah, the longer a battery will last at a given power output.

Watt Hours (Wh) – this tells you how many watts your e-bike battery can sustain for one hour. Watt Hours is equal to your battery’s Ah x V. For example, pair a 250W motor with a 252 Wh battery, and you could run the battery at full capacity for about one hour. If you used a lower power setting, for example, you could run the battery at 125W for about two hours.

Most e-bike companies are accurate in listing their e-bikes’ metrics. As with any electronic, individual devices can vary based on production and materials. Batteries degrade over time, but it will be over many, many years. At worst, your battery life may be off by a few minutes, but it should never be enough to leave you stranded 20 miles from home.

There are a few different sensors that you will hear mentioned in the same breath with e-bikes, mainly cadence sensors and torque sensors.

Cadence sensors simply measure how fast you are pedaling/turning the cranks. In most e-bikes, as soon as pedaling is detected, the motor will turn on. Thus the name: pedal-assist technology. Cadence sensors are generally meant for budget e-bikes. The sensor causes the motor to operate like an on/off switch rather than a smooth gradient.

Torque sensors measure how hard you are pedaling, or how much force you’re applying to the pedals. Rather than only measuring the speed of the pedaling, torque sensors take your effort into account. This makes for a smoother riding experience where the e-bike motor adjusts its assistance based on how hard you’re pedaling.

How much does an electric bike cost?

The average electric bike costs $800-1,000 for basic e-bikes with low-end components. More reliable e-bikes are usually priced at around $1,500.

However, there are several factors that affect the price of an electric bike.

E-bikes are powered by motors that use expensive lithium-ion batteries. This makes e-bikes durable, rechargeable, and long-lasting – but expensive.

Most e-bikes are also built with tougher materials and components to withstand the extra weight of the motor and battery. This includes robust groupsets, heavier wheels, and thicker tires.

The vast majority of e-bikes also come with disc brakes which are necessary to stop the heavier and faster frame.

What size motor is best for an electric bike?

E-bike motor sizes vary from 250W to 750W, and sometimes outside that range, too. Most e-bike options will come in either 250W, 500W, or 750W versions. The less wattage (W) you have, the less powerful your e-bike’s motor is.

Commuters and beginner e-bike riders should try 250W or 500W motors which can power them up to 20-25mph. These motors provide enough boost to make your rides and every hill easier, without overwhelming you with power.

Advanced e-bike riders should look at 500W or 750W motors which are better for climbing and high-speed cycling. More powerful motors are also great for off-road riding such as MTB which includes steep hills and technical terrain.