How to Charge an Electric Bike? Easy Step-by-Step Guide 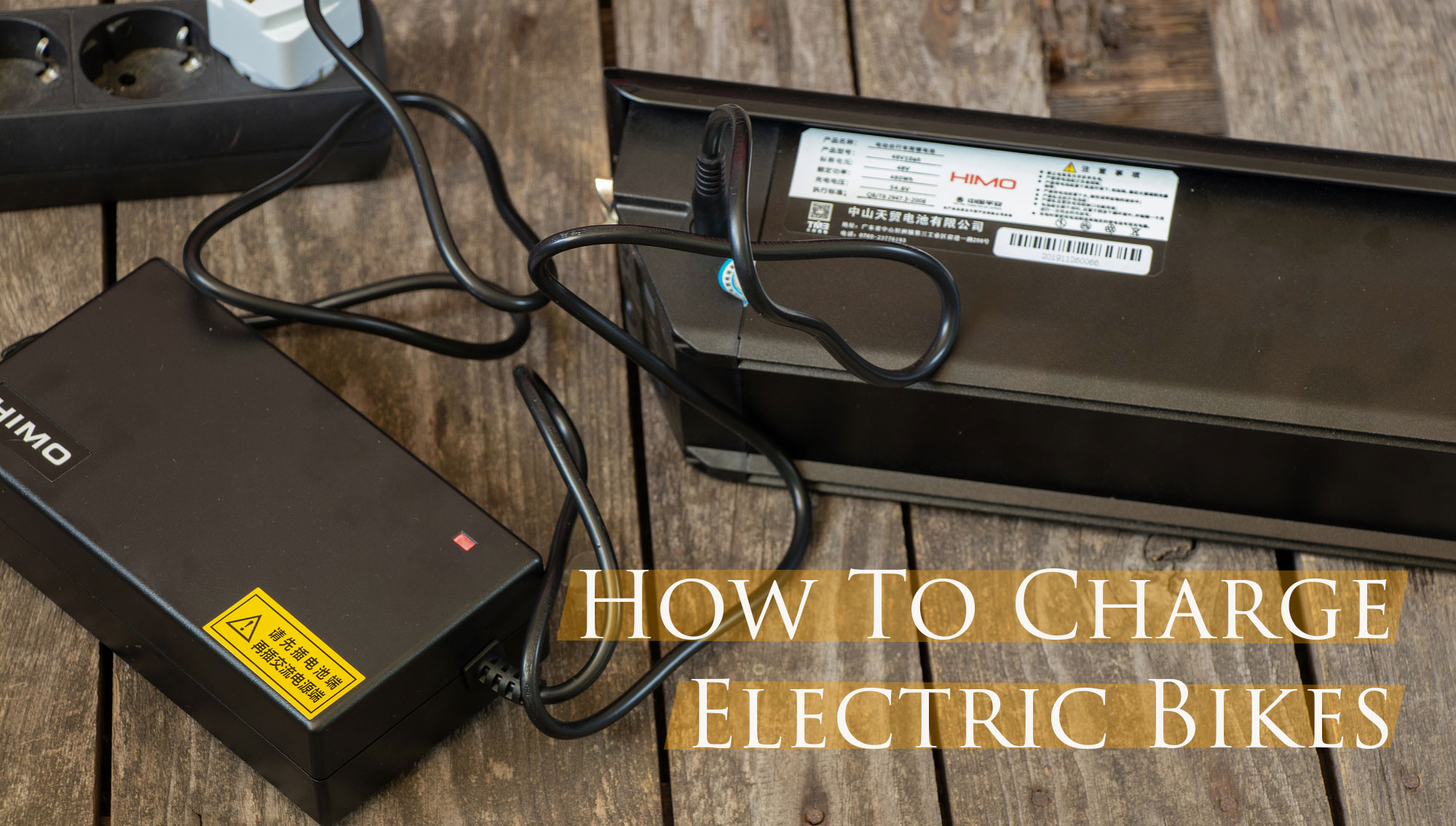 Charging e-bikes is not the first thing you think about when purchasing an electric bike, but it’s vital it’s done right.

If bikes weren’t already complicated enough, e-bikes have added a whole new element to the conversation with their electronics.

Between Amp Hours, Voltage, and Watts Hours, e-bike batteries may be hard to understand.

But e-bike battery charging is simpler than it seems. Charging e-bikes may seem complicated and overwhelming, but that’s why we’re here.

In this post, we’re going to explain electric bike charging from the basics to advanced tips for prolonging e-bike battery life.

Before you start, always read through the manufacturer’s instructions before charging your e-bike.

While the overriding principles for charging e-bikes may be the same, different batteries may come with slightly different instructions.

The energy that an e-bike uses depends on a few factors: voltage, amp hours, and watt-hours. A typical e-bike battery will be labeled as something like, “48V, 10.5 Ah (504 Wh).”

Voltage (V) is the force pushing the electrical current through the e-bike’s system. A higher voltage will deliver more energy through the system, resulting in higher power/torque over a given period of time.

Amp Hours (Ah) is a measurement of a battery’s capacity, of how much current the battery delivers in an hour at a certain voltage. Using the above example, this battery would deliver 10.5 amps for one hour at 48 Volts.

Watt Hours (Wh) is the number of watts that a battery can deliver in an hour. It is simply Amp Hours x Voltage, but only when using the system at its maximum capacity. Using the above example, this 504 Wh battery would last about an hour if paired with a 500W motor, which is common on e-bikes.

When it comes to battery life, Amp Hours (Ah) is the most important measurement. Larger Amp Hours mean larger capacity, which allows you to ride further on a single battery charge. Increasing the Watt Hours (Wh) in an e-bike battery will deliver more power delivered over time, but it will not necessarily increase your e-bike range.

To determine how long an e-bike battery needs to charge, all you need to know is the Amp Hours in the battery and the Amp in the charger. For example, a 2 Amp charger is common among electric bikes. Paired with a 10 Ah battery, a 2 Amp charger will take five hours to fully recharge the battery. The basics of charging e-bikes are simple, the actual charger doesn’t look too different from other chargers.

When you learn how to charge an e-bike, there are a few steps to keep in mind:

Many models have a removable battery which makes charging e-bikes a bit easier. But other e-bikes have the battery integrated into the frame. Either way, make sure you check the manufacturer’s instructions before attempting to remove the e-bike battery.

There are a few different items that you’ll need to connect to get your e-bike battery charged: battery pack, battery bay (what connects the bike to the battery), charging power supply, and two cables to connect the power supply.

Most e-bike chargers are self-explanatory, with the cords and connections being very obvious. But if you’re unsure, check the manufacturer’s directions to see exactly what goes where.

Main Rules of Charging a Bike

The #1 rule of e-bike charging is to always use the correct charger. Each charger is specific to an e-bike, and you don’t want to mix and match batteries with chargers. Here are some of our favorite e-bike charging tips.

The first battery charge of every e-bike is critical. When you bring a new e-bike home, don’t just plug it into the wall. Each manufacturer has a specific set of instructions for the battery’s first charge, and this charge can have a significant impact on the overall life of the battery.

You should always charge your e-bike indoors because of the electric circuits that are running through the bike and the battery.

While the e-bike stays protected from the elements, the power supply, and charging cords can not handle water.

You’ll know when to charge your e-bike battery based on LED light indicators and/or a heads-up display. Most e-bikes come with a display mounted on the handlebars which lets you control the assistance from the e-bike’s motor. These displays typically include a page that shows the e-bike’s remaining battery life.

It takes most e-bike batteries 2-6 hours to fully recharge.

One of the main hazards of e-bike charging is mixing up your e-bike battery chargers. While all e-bikes come with a charger, these chargers are not interchangeable with e-bike batteries.

So if you have multiple e-bikes and chargers lying around at home, make sure to always use the correct charger.

Using the incorrect charger on an e-bike battery can result in fires, burning out the battery, or even worse.

Another downside of e-bikes is the time that it might take a while for the battery to recharge. The most powerful e-bikes with the largest range can take upwards of six hours to charge. If you forget to recharge your e-bike overnight, you might not have enough battery life for the next day’s adventure, for example.

With a bike battery charge, you never want to let your battery completely drain before charging it.

The Lifespan of Electric Bike Batteries

A typical electric bike battery should last 3–5 years depending on usage. While charging it is actually quite simple, there are a few simple tricks you can use to prolong the battery’s life as much as possible.

Related: How to Choose an Electric Bike

First, don’t recharge the battery after every ride. An e-bike battery will last the longest if you keep the battery charge between 20% and 80%.

Second, avoid over-charging your battery, or charging it for too long. Specifically, don’t leave your e-bike battery charging for more than 12 hours.

Lastly, keep your e-bike battery in comfortable storage conditions. That means keeping it on a flat, hard surface in a lukewarm room that is not too hot (80°F / 27°C) or too cold (50°F / 10°C). Keep your battery as clean as possible, especially after a dirty commute in the rain.

Heavy battery usage may shorten an e-bike’s battery life, but not significantly. Regular recharging and maintenance are most important in determining a battery’s life.

How long does it take for an electric bike to charge?

A typical electric bike battery will take 2–6 hours to fully recharge. The charging time depends on the battery’s capacity and the power supplied through the charger.

Should I charge my e-bike battery after every ride?

Can I leave my e-bike on charge overnight?

You can leave your e-bike to charge overnight, but only for some e-bike batteries. However, you want to avoid overcharging your e-bike to help prolong its long-term battery life.

If your battery takes 4 hours to charge and it is at 50% battery, you do not want to leave it charging overnight which would overcharge the battery for multiple hours.

Ideally, you should charge your e-bike battery for a few hours once every few rides.

Electric bike batteries can be expected to last 3–5 years in normal usage conditions. This includes recharging, maintaining, and cleaning your e-bike battery on a regular basis to prolong its life.

How far can a fully charged e-bike go?

A typical e-bike can go 20–50 miles on a single charge, with long-range e-bikes being capable of 80+ miles. This range varies based on battery usage, rider and cargo weight, terrain, and speed. E-bikes that are built for all-day adventuring may have extra large batteries capable of providing nearly 100 miles of motor assistance.

What happens if I overcharge my e-bike?

Overcharging your e-bike can result in battery damage which shortens its overall life. The power delivered by the battery should not change, but its overall capacity will as a result of overcharging.

How do I know when my electric bike is fully charged?