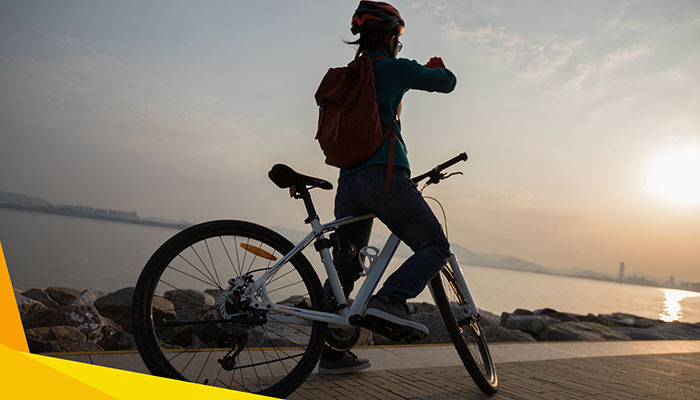 So you’re in the market for a new bike but having that internal debate, hybrid bikes vs mountain bikes?

We’ve all been there and here we will be looking at the differences between the two types of bikes.

For those short on time, we can give you a summary…the main difference between mountain bikes vs hybrid bikes is that a hybrid tends to be lighter in weight and slightly more aerodynamic.

Tires will be slicker and hybrid bikes use rim brakes, whereas mountain bikes use disc brakes. Mountain bikes have some form of suspension, hybrids often don’t and for that reason, they are more suited to road, gravel, and dirt paths, not seriously off-road terrain.

There’s nothing clever about the name, a hybrid bike is a mix of a road bike and a mountain bike…a hybrid between the two!

This means that hybrid bikes are good all-rounders. You can take a hybrid on the road or off-road and it will perform.

Flat handlebars tend to feature on hybrid bicycles, similar to what you find on mountain bikes and this means that changing gears and handling is very similar.

What you get on a hybrid bike is an upright riding position. This means that you aren’t as efficient as you would be if you were on a road bike for example but you will be more comfortable and arguably, safer in traffic as you’ll be more visible.

If you’re wanting to do more off-roading with a hybrid go for one with larger tires – around 26”. More for road us? Choose a hybrid with 700c tires as they’re more geared towards road use.

Rim brakes are commonplace on hybrid bikes and that’s well suited for what the bikes are intended for. Disc brakes would more often than not be overkill.

Hybrid bikes are very popular with commuters due to their versatility.

Mountain bikes are rugged and made for trails and being off-road.

The handlebars are flat and usually quite wide to give you solid control of the bike. Tires tend to be large and knobby to increase traction.

Expect to see disc brakes on mountain bikes and a wide range of gearing to take on the steep climbs and descents.

There are different types of mountain bikes. Hardtails have suspension on the front and a rigid frame, giving the bike a “hard tail”. Full-suspension bikes have front and rear suspension.

As a rough rule, the more technical the trail you want to take on, the more rear suspension you want.

If you’re a smaller rider, then we would recommend 27.5” wheels, rather than 29ers.

See the MTB Selection on REI

The first thing that pops to mind when looking at the two together, is how different the geometry is. The mountain bike just looks so much more aggressive. Mountain bike is on the left, hybrid on the right

Mountain bikes are good at taking on steep terrain, whether that’s up or down. They are very stable on loose terrain and will take on rough roads with no problem.

The frame on mountain bikes tends to be long and slack. This gives you much-needed stability on technical trails. The drawback to this is the handling can be slow, especially when compared to a hybrid bike.

A hybrid frame is similar to a dropped-handlebar road bike but more upright and with a straight bar.

The straight bars do give you a good sense of control but are not sufficient for technical or rough terrain.

As a hybrid bike keeps you in a more upright position, it can be more comfortable for riding for longer periods.

In terms of materials, both mountain bikes and hybrid frames are often aluminum as this strikes a good balance between weight and strength.

Having said that, the more expensive mountain bikes are now being made using a carbon fiber frame. This is strong, but light so works really well.

What you often find on hybrid vs mountain bikes, is the appearance of eyelets. These can be used to fit panniers or other accessories on, making it the more suitable choice for commuters.

Looking at the bikes side by side, it’s easy to see how different they are. Hybrid bikes often don’t have any suspension. Some that do are still not offering quite as much as mountain bikes (mountain bike on the left/hybrid on the right).

Suspension is probably the biggest difference after the frame when comparing hybrid vs mountain bike.

So the assumption is that hybrid bikes will spend most of their life on paved surfaces. Therefore the need for a suspension isn’t really there.

Adding a suspension, add weight. So you have to be sure you really need that suspension, otherwise, it’s just unnecessary weight.

There are some hybrid bikes out there that do come with a front suspension and this does mean that they do cope better on trails.

Does it compare to a true mountain bike suspension? Hybrid bikes often have less travel, around 60-80mm, which is less than mountain bikes. However, it all comes down to preference. For example, the Cannondale Quick series is worth considering.

Hardtail mountain bikes excel in light trails and tend to be faster than full suspension bikes due to the weight difference. In order to absorb shocks when you’re on the trails, hardtails have around 100 – 120mm of travel.

This is typically less than full-suspension mountain bikes, which have around 120 – 250mm of travel. These are designed to tackle the roughest and steepest trails.

As generally more is asked of mountain bikes, the components should ideally be more robust.

What you should find is that mountain bike gearing has a wider range of gears than hybrid bikes in order to deal with steep drops, tough climbs, and well, basically anything you can throw at them.

Whereas you’re unlikely to experience this with hybrid bikes as they tend to spend the majority of time on relatively flat roads so the necessity for a wide range of gears isn’t there.

Why? They need to be. Mountain bikes have a harder life and need to be built to last rougher treatment.

Moving on to brakes. You will sometimes see hybrid bikes using disc brakes. However, the most common type of brake for hybrids is rim brakes. Rim brakes are cheaper, lighter, and maintenance is much easier.

Given where and how most people ride their hybrid bikes, the addition of disc brakes isn’t needed and just adds extra cost, weight, and maintenance.

Which is better hybrid or mountain bike?

Choosing between a hybrid and a mountain bike very much depends on your needs! Are you always wanting to ride off-road? You should consider a mountain bike.

If you see yourself wanting to ride on the road, while still being able to go off-road occasionally, a hybrid bike is an excellent choice.

What is the difference between a mountain bike and a hybrid bike?

Mountain bikes have some element of suspension. They are heavier due to extra gears and larger tires.

Whilst hybrid bikes can go off-road, they can’t take on the technical descents that a mountain bike can.

Is a hybrid bike faster than a mountain bike?

When you compare mountain bike vs hybrid for speed, the hybrid bike wins.

On a flat surface, a hybrid bike is faster by around 3.9%. That percentage drops on an incline, though the hybrid still wins.

So whilst there isn’t much in it, a hybrid bike is still quicker than a mountain bike.

Can I use my hybrid bike as a mountain bike?

A hybrid bike can be a great way to dabble into mountain biking without having the expense of buying a mountain bike.

The fact is, a hybrid bike can’t do what a mountain bike can, and they’re not designed to.

However, you can take a hybrid bike onto some trails and get a good feel to see if off-road life is for you.

Is a mountain bike heavier than a hybrid?

Yes, a mountain bike is heavier than a hybrid.

It’s common for a mountain bike to have more gears than a hybrid bike, which adds weight. There is sometimes the addition of a suspension, which can add a lot of weight. Using disc brakes instead of rim brakes also adds weight.

Why are mountain bikes so slow?

Mountain bikes tend to be slower than other types of bicycles this is due to the extra weight of adding a suspension (or two!), additional gears, larger wheels.

The tire pressure in mountain bikes also tends to be lower so you feel an increase in the rolling resistance too, which can make the bike feel even heavier.

Are hybrid bikes good for exercise?

Hybrid bikes are excellent for exercise.

Let’s face it, any type of cycling is good exercise!

What is a hybrid bike good for?

Hybrid bikes make good all-rounders. You can take them off-road or comfortably use them on the road.

No bike is perfect and that is how we cyclists justify having so many bikes. In the end, it comes to what you are wanting from a bike. Consider how you will be using it and what you want from a bike.

If you plan to spend most time riding in the city with the occasional weekend on a tour, a hybrid could be ideal.

However, if you’re more of a thrill-seeker and want more challenging trails then a mountain bike should be in your thoughts!

Or See the Best Hybrid Bikes 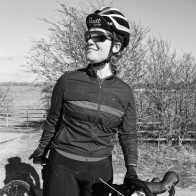 Predominately a road cyclist and having completed London to Paris twice now, she’s looking for the next cycling challenge. She can often be found cycling a Col in Mallorca (typical cyclist, right?). Bikes are her life and have written articles and reviews on the subject for years. Amy likes to keep up to date with all things cycling by trying new bikes, equipment, and accessories out so expect first-hand experiences!