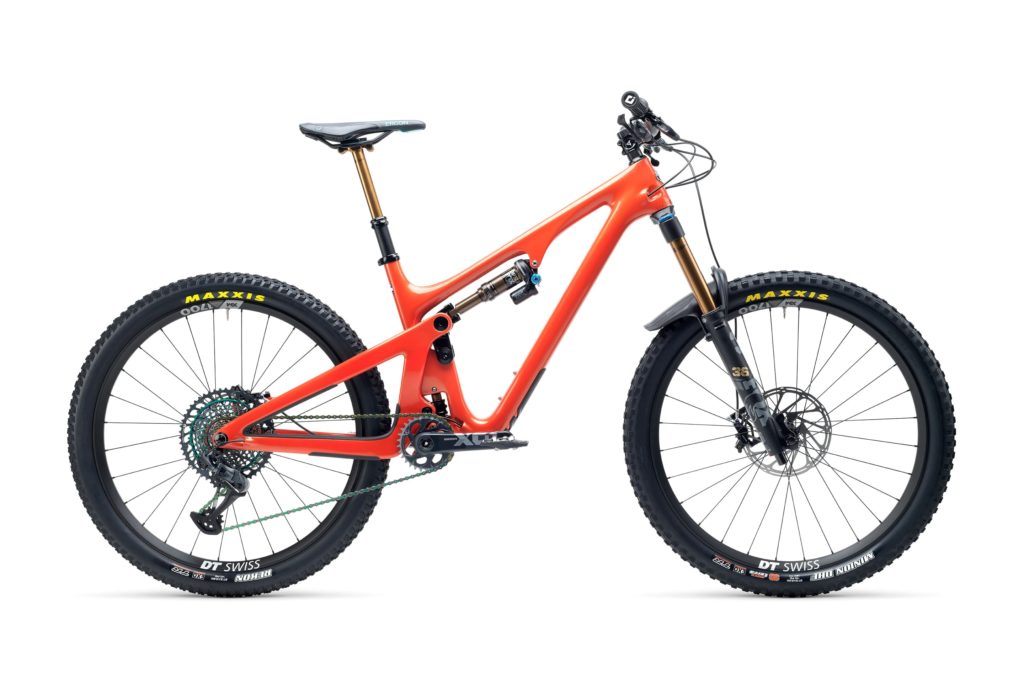 Yeti SB140 is a 27.5″ trail ripper with the playfulness you’d expect from smaller wheels and capabilities that even some 29ers lack.

Yeti Cycles has done some impressive work with 29″ mountain bikes recently. The SB100, SB130, and SB150 models have rocked the MTB scene and established themselves as go-to choices for versatile trail riders.

Now the time has come to pay some attention to the 650B side of the market as well. That’s why Yeti has pushed out the new and improved SB140 trail bike.

The long-travel SB140 is a bike for all trails. As Yeti says, “SB140 never met a dirt it didn’t like.” That makes sense when you consider the Switch Infinity system, Fox suspension, top-tier carbon frames, massive 2.6″ tires, and efficient 1X drivetrains.

As you can probably guess from its name, Yeti SB140 has 140mm of rear travel, paired up with a 160mm fork. As is usually the case with Yeti bikes, this model has a long list of innovative features and high-level components that would impress many. However, what it also has is a high price that makes it unattainable for most casual riders out there.

If your wallet is thick enough, here are a few reasons why you might consider riding Yeti SB140:

You can get Yeti SB140 in one of the five available complete builds, ranging in cost from $5,200 to $8,700. Additionally, you can opt for the frame-only solution and get the TURQ frame with shock for $3,600.

Here’s a quick run-down of the available builds, their prices, and characteristics, to help you choose the right one for your needs.

The SB140 is a modern trail bike with progressive geometry and Yeti’s Switch Infinity suspension system. Therefore, it is a good-for-all two-wheeler that can climb, descend, jump, drop, and do whatever else comes to your mind.

Since this bike and its real-world capabilities are the sum of its parts, let’s take a closer look at some of the most important features that you’re getting for your money.

Yeti Cycles SB140 comes with a carbon frame made from either TURQ or C/Series carbon. TURQ carbon is Yeti’s premium material, characterized by extreme stiffness and lightest. The C/Series carbon, according to the company, is just as stiff and strong, but it is slightly heavier. The difference in weight between these two framesets is around 250g, which is not a dealbreaker.

Yeti SB140 comes with 27.5″ wheels and 2.6″ tires, which is almost in the ‘plus’ category. The frame offers plenty of clearance, so you can go with even wider tires.

Thanks to a unique design, the frame also has enough room for a full-size water bottle in the front triangle. This will make a lot of riders happy, especially those who like spending the entire day exploring the trails.

Yeti SB140 has a suspension system that’s tweaked for fun, especially when compared to the new-age 29ers that strictly mean business.

Depending on the build you choose and the budget you have, your SB140 trail bike will come with either Fox Performance 36 or Fox Factory 36 suspension. You get 140mm of travel in the rear, coupled with 160mm in the fork. That translates to confidence, stability, and control on the trails, especially when combined with the Switch Infinity technology.

The Switch Infinity technology is one of the most innovative and authentic suspension systems in the MTB industry. As a result, the design has won numerous Editor’s Choice Awards.

The Switch Infinity linkage connects the front and the rear triangle to allow SB140 to have anti-squat properties that come into effect when pedaling or bottoming out. This improves pedaling efficiency and minimizes the dreadful kickback that happens in the second half of the travel curve.

Yeti SB140 comes equipped with top-tier SRAM and Shimano components that have been tried and tested many times before. The groupsets vary from mid-range to high-end, depending on which build we’re talking about.

In addition to that, all SB140 builds come with Fox Transfer dropper posts with 125mm–175mm of travel, depending on the frame size.

To be more precise, the wheels are 30mm DT Swiss XM1700 on TURQ models and M1900 on C/Series models. Though, they are upgradeable on the TURQ models, so you can swap them for an EXC 1501 Carbon wheelset.

The tires are the same on all builds. You get Maxxis Minion DHF 2.6″ on the front wheel and Rekon 2.6″ on the rear. These are excellent tires for hardpacked and dry singletracks you’ll find on the West Coast. However, they might not be the best choice for wet and muddy trails found on the East Coast.

If you’re not happy, swapping the tires on SB140 is an easy step, and you can go even wider with your choice into the proper ‘plus’ world.

All in all, the tires are wide and grippy, offering more than enough traction and stability over rocks, boulders, hard and soft dirt. The wheels are light and stiff, but it’s a shame the carbon EXC 1501 wheelset does not come stock with the most expensive build.

Yeti Cycles SB140 is a long, slack, and aggressive trail machine. This bike has a super-slack 65° head tube angle, combined with a super-steep 77° seat tube angle.

The slackness of the front end gives you more stability and a better attack angle. These come in particularly handy during speedy and technical descents, which is where SB140 shines the most.

However, the steep seat tube angle means that your weight will not be too far back. That’s important considering that SB140 has a pretty long front end (460.1mm reach in the medium frame), which would otherwise make the front wheel unstable. This way, there’s enough weight on the handlebar to keep the front tire firmly on the ground even when pedaling up very steep climbs.

Yeti SB140 is fun, fast, nimble, and smooth to ride thanks to the tires, the geometry, and the exquisite suspension. Bikes with 27.5″ wheels are slower than 29ers, no doubt about that, but this bike is made to have fun and enjoy the most technical trails you can find in your area.

Yeti SB140 is available in five frame sizes, which is one more than the company’s 29″ models, such as the SB100 or SB130. The official website contains all the information you need to pick the right frame size, including a detailed geometry chart.

Here’s a quick size table that you can use to find the right size based on your height.

Find our answers to the most popular questions about Yeti bikes below.

Yeti Bikes makes some of the best mountain bikes in the world. They are frequently ridden by sponsored professional cyclists who ride them to the podium. Yeti bikes are made with high-quality materials and brand-name components that have been tried and tested time and again.

Where are Yeti frames made?

Yeti started manufacturing frames in Taiwan in 2008. Before that, Yeti’s frames were made in the USA. Even though the company makes frames in Taiwan, the bikes are assembled in assembly facilities in the US, where they also pass stringent quality controls.

What is Switch Infinity?

Swift Infinity is a unique full-suspension technology created by Yeti. It’s made of a special pivot situated behind the seat tube, that connects the front and the rear triangle. This technology makes pedaling more efficient thanks to its anti-squat properties and controls the kickback of the rear end at the end of the travel curve.

Yeti SB140 is a full-suspension trail bike with 140mm of rear travel and 160mm of front travel. SB140 has 27.5″ wheel and wide 2.6″ tires, which makes it a good all-around choice for riders who do a little bit of everything. It’s a playful bike that can climb, descend, and storm technical trails.

Is Yeti SB140 too expensive?

Yeti SB140 is not a cheap bicycle. It’s a premium trail bike with high-end components, excellent suspension, modern geometry, and advanced technologies. This bike has some shortcomings, but it provides a very good value for money overall. Therefore, though pricey, it’s not unreasonably expensive.

Who is Yeti owned by?

Final Verdict: Is Yeti SB140 Worth the Money?

As Chris Conroy, the president of Yeti said in one interview, the SB140 is a shredder’s bike. It’s the right bike for someone who’s on a mission to smash every feature on the trail. If you’re that person, you’ll love how fun and capable this bike is.

To the right person, Yeti SB140 is worth the money. Though 29ers are dominating the market at the moment, smaller-wheel rides are far from becoming obsolete.

Yeti SB140 is packed with impressive features that you’ll be happy to have when the going gets tough. Meaty tires, spotless suspension, and top-tier components being just a small part of it.

So if you’re looking to incorporate more fun into your trail rides and experiment more with your lines, Yeti SB140 is the right trail bike for you. 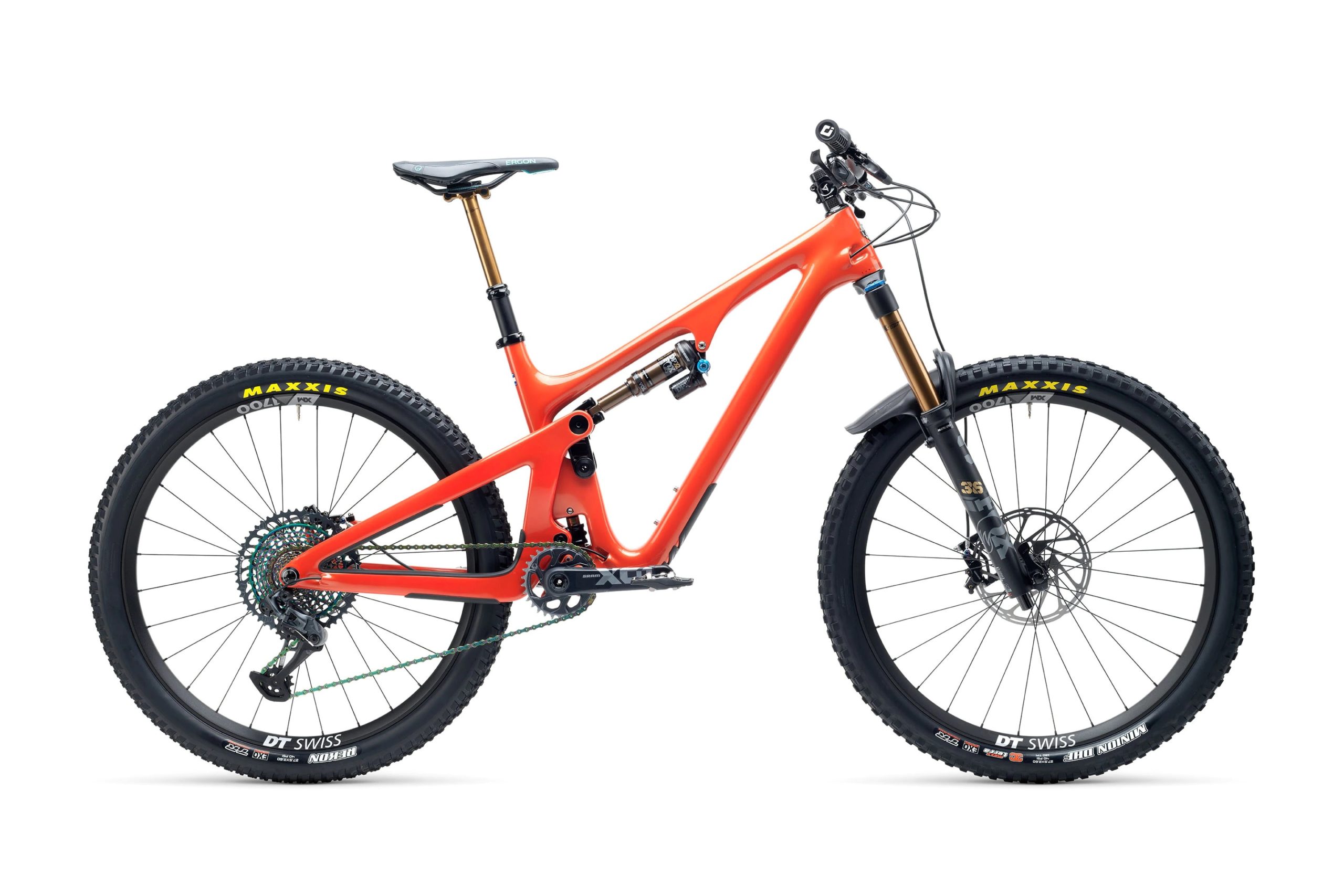