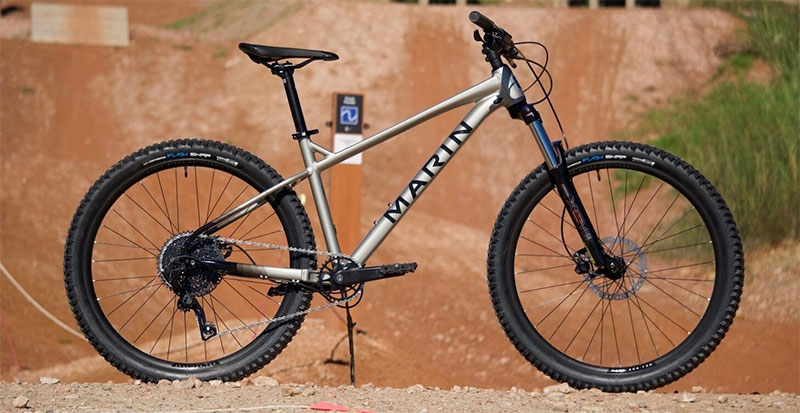 The Marin San Quentin is named after a maximum-security prison in Marin Country, California – and it’s a fitting name for the rough and rugged style of the Marin San Quentin series which offers enduro/all-mountain bikes designed for the gnarliest hardtail tracks.

In this Marin San Quentin review, we’re going to take a closer look at one of the best enduro mountain bike series.

The versatility of the Marin San Quentin series is impressive, as these hardtail frames can handle jumps, gaps, and berms, all while maintaining a stable climbing frame.

There are three different models to choose from in the Marin San Quentin series, with a wide price range fitting for amateurs and experienced mountain bikers.

Let’s jump right into it.

San Quentin’s name comes from the maximum security California State Prison in Marin County, a fun fact that you can share next time you’re at the bike shop.

Marin chose the name to reflect the “most rough and tumble piece of Marin County,” and an enduro/all-mountain hardtail that can handle it all.

The end product is simultaneously stable and gnarly. These frames have massive standover and slick frame tubes to help you get the most out of the San Quentin on all types of trails.

Here is the full list of options in the Marin San Quentin series: 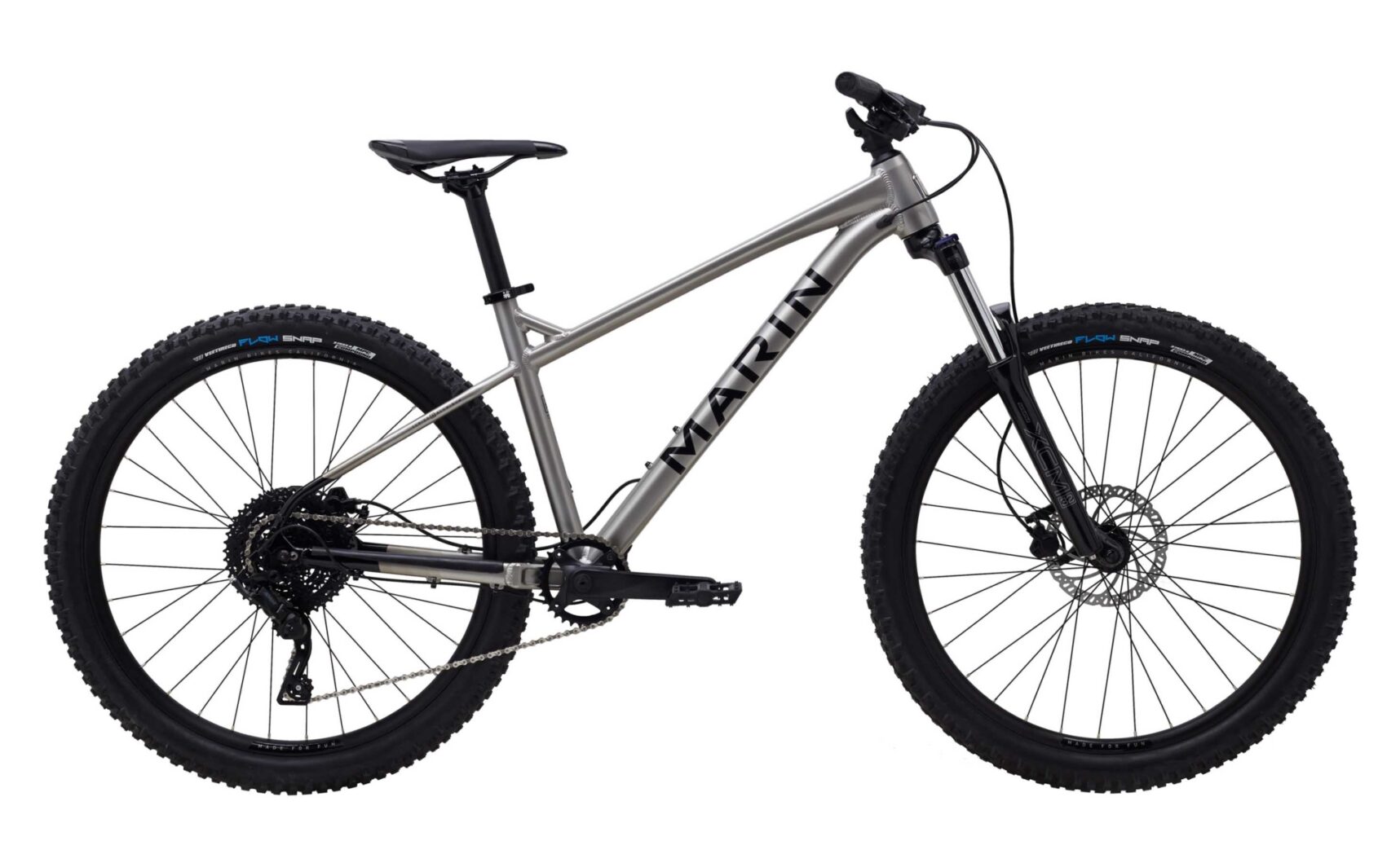 The most basic San Quentin is the Marin San Quentin 1, a light dirt jump enduro hardtail designed for singletrack, jumps, and everything in between.

Compared to the other frames, the San Quentin 1 has a different frame in the Series 2 aluminum. The frame includes tapered head tubes, as well as 3D forged dropouts, IS brake mounts, and semi-internal cable routing.

There are small sacrifices on an otherwise fantastic frame, and one that you can get for just $1,099. The front suspension is the SR Suntour XCM32 Boost with 120mm of travel, plus a bolt-on thru-axle and 47mm offset. Rims are Marin’s double wall alloy, with Vee Tire Co, Flow Snap 2.6” tires.

Tektro hydraulic disc brakes provide plenty of stopping power, and the groupset includes a Sunrace 9-speed 11-46t cassette, and MicroShift rear derailleur. The Marin San Quentin 1 is the only San Quentin without a dropper post. Instead, you get a simple Marin Alloy 30.9mm seatpost. 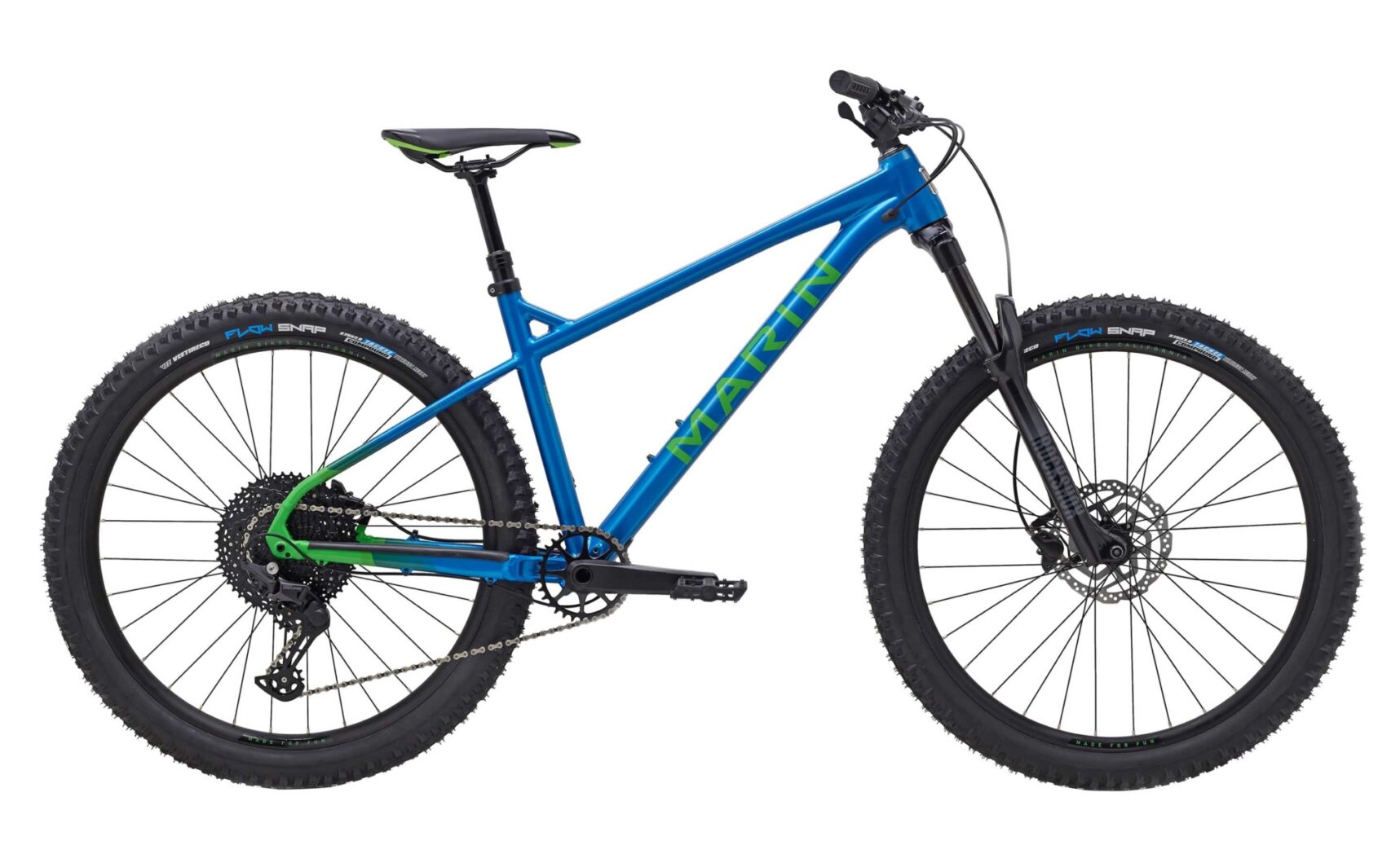 The middle option in the San Quentin series is the Marin San Quentin 2. This bike is another light dirt jump enduro hardtail designed for singletrack, jumps, and everything in between.

Compared to the San Quentin 1, the Marin San Quentin 2 has a number of significant upgrades.

The upgrades start with the Series 3 aluminum frame with 12x148mm thru-axle.

The San Quentin 2 is available for $1,599, which is a great price point for a hardtail with this level of versatility.

SunRace 11-speed cassette with 11-51t gives you a few more gears to get up the steepest of climbs. There is also a dropper post on the Marin San Quentin 2 – the TranzX seatpost with 150mm of travel. 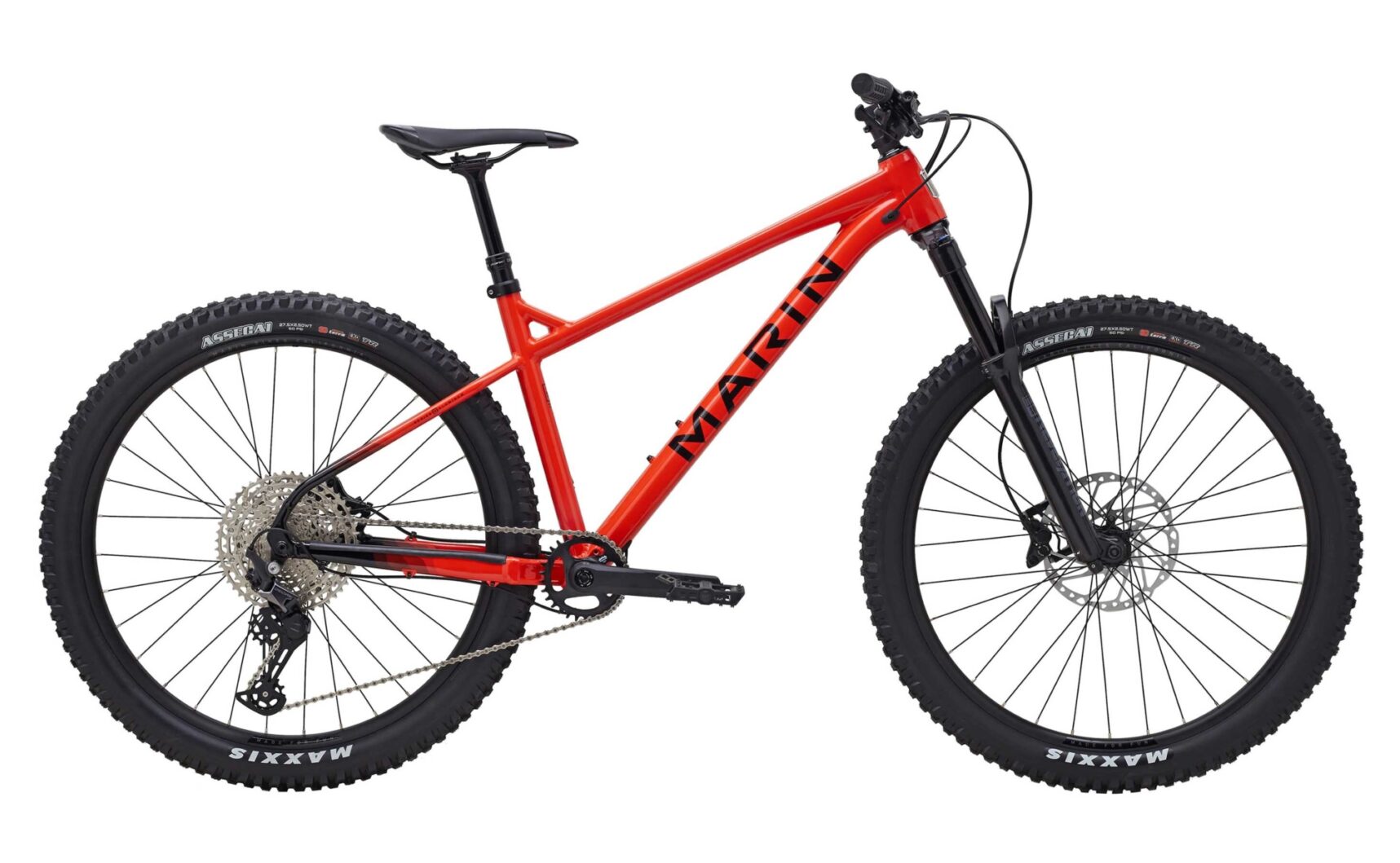 One of the biggest upgrades is the suspension. Marin San Quentin 3 comes with RockShox Revelation RC front suspension with 130mm of travel. The tires are new, in the Vee Tire Co Attack HPL 2.5” tires which are tubeless compatible.

They are all upgraded from the other San Quentin models. Even the dropper post is upgraded, this time you get an X-Fusion Manic seatpost with 150mm of travel. 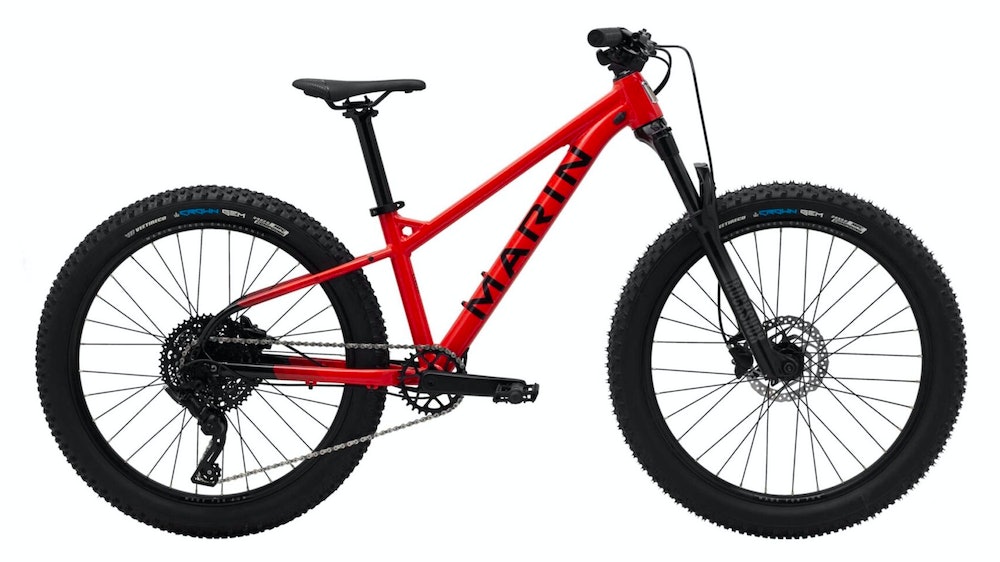 Marin took the geometry and features of the San Quentin series and shrank it down to a child-sized model. This bike appropriately comes with 24” wheels and comes in at $1,199.

On the Marin San Quentin 24, you will have 100mm of travel on the RockShox Judy Silver TK suspension. The bike rolls on Vee Tire Crown Gem 2.6” tires, which are the same as San Quentin’s 20″ model. Shimano BR-MT201 hydraulic disc brakes with 160mm rotors are reliable and easy to use.

Marin San Quentin 24 doesn’t really have as many kids-specific features as the model with 20″ wheels.

There is no dropper post on the Marin San Quentin 24, but there is MicroShift 9-speed shifting and an 11-46t rear cassette for plenty of options going uphill, downhill, and on the flats. 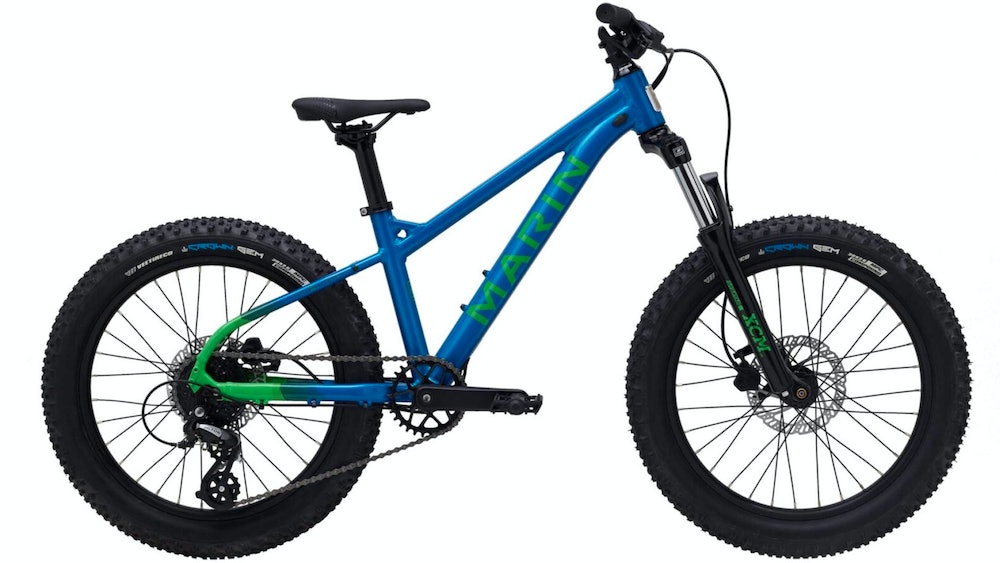 The smallest member of the family is the Marin San Quentin 20, named for its 20” wheels. This is a kids-sized bike that comes in at $749. It has many of the same capabilities as the rest of the Marin San Quentin series. Think, aggressive enduro hardtail ready to tackle jumps and singletrack – but this time on a much smaller scale.

Marin San Quentin 20 features a Series 2 aluminum frame, along with a tapered headtube, forged dropouts, and semi-internal cable routing. There is even the same modern trail geometry, so the little one can handle rough off-road sections, parks, and more.

The front suspension is the SR Suntour XCM 24 Boost with 80mm of travel, which is much less travel than the other San Quentin models. There is a 1x drivetrain – just like the other San Quentin’s – which simplifies shifting. Yet there are 8 gears to choose from in the MicroShift 8-speed 12-42t rear cassette.

With five different models to choose from, anyone from beginners to experienced riders can find a Marin San Quentin that suits them.

How heavy is the Marin San Quentin 1?

Though the Marin San Quentin 1’s weight is not officially listed, the bike weighs roughly 32 lbs.

Does the Marin San Quentin have a dropper post?

The Marin San Quentin series is designed for mountain bikers looking to up their shred factor on a hardtail mountain bike frame.

With modern trail geometry, the Marin San Quentin is capable on the climbs and flats. It can even handle the gnarliest jumps and biggest gaps.

There are three models (plus two for kids) to choose from in the Marin San Quentin series, so anyone can find their frame from beginners to elite mountain bikers.

Featuring a dirt jump frame style, slack head tube angle, and steep seat tube angle, this aggressive hardtail frame is one of the best available for all mountain bikers.

If you are looking for an enduro/all-mountain hardtail mountain bike capable of handling jumps, gaps, singletrack, fire roads, and everything in between, go with Marin San Quentin.

See All Models on Jenson USA