Stigmata is not a new model in Santa Cruz’s lineup, but it has recently been redesigned to comply more with evolving gravel standards, so it is definitely a modern carbon bike.

Stigmata is stiff but compliant enough, light, fast, good-looking, versatile, and progressive. However, it is also rather expensive, which might deter some. However, it is sure to attract hardcore gravel grinders who would benefit from Stigmata’s clever design solutions. 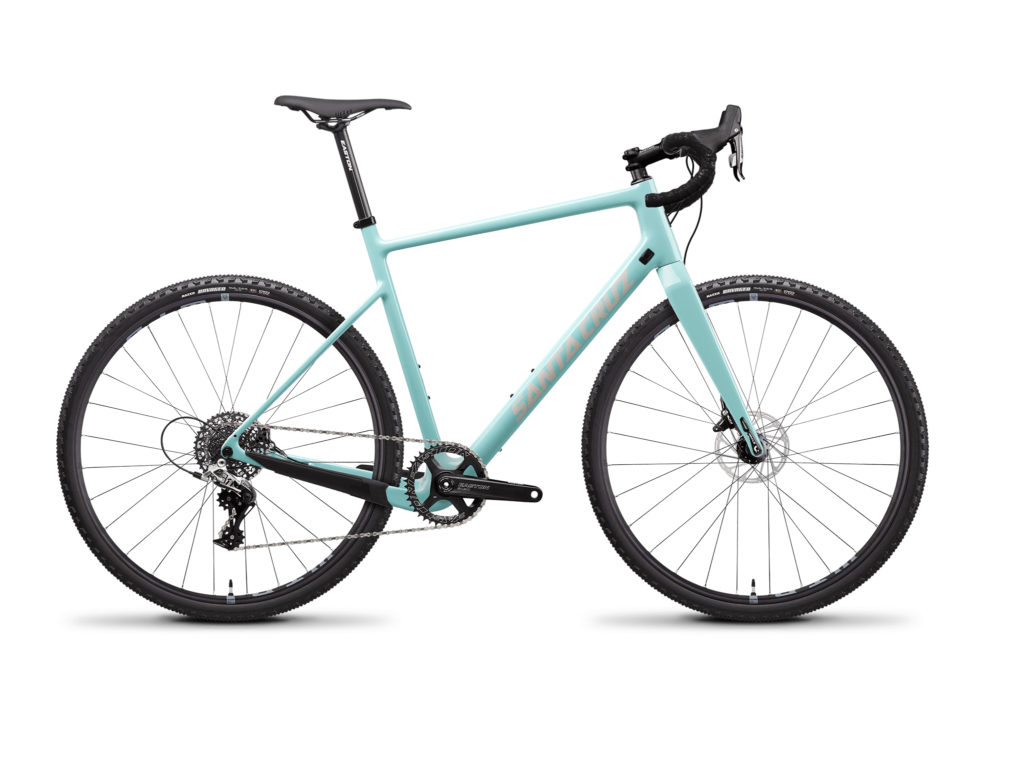 Santa Cruz Stigmata is a veteran in the cyclocross and gravel world. The model was first introduced as a cyclocross bike that tested the norms back in 2007. It had more tire clearance, more bottom bracket drop, and a longer wheelbase compared to the standard at the time. It was basically a precursor to the modern gravel bike.

The model was reintroduced in 2011 and 2015, but it wasn’t until 2019 that it achieved its full potential in terms of its gravel nature.

The model we see today has even more tire clearance, gravel-friendly geometry, a stiff carbon frame that’s not set out to destroy you, and more versatile handling.

Another sign that Stigmata has evolved further away from its harsh CX beginnings is that it now comes with mounts for a third water bottle under the down tube and discreet fender mounts that will allow you to extend the route and ride past the rain barrier.

However, these are not the only features that make Santa Cruz Stigmata an excellent buy, despite the intimidating price tag.

Santa Cruz Stigmata is available only with a lightweight Carbon CC frame, which explains why the cheapest build costs around $3,600. Of course, the frame is paired up with a stiff carbon fork and the frameset is available in two colors across all five builds: light blue and dark green.

The rear triangle features some vibration eliminating compliance, so the ride does not feel too harsh, despite the stiff carbon. Instead of balancing between CX and gravel performance, Stigmata is leaning more toward being a purebred gravel bike.

As mentioned above, the frame also features discreet fender mounts and three water bottle cage mounts. The front triangle is roomy enough for a frame bag, with plenty of space to reach for the water bottles beneath.

If you want to have a Stigmata in your personal gravel collection, you have five builds to choose from, priced between $3,599 and $5,499, plus the frame only option that costs $2,299.

The five builds in question are:

When taking a closer look at the builds, it’s easy to see that SRAM Rival is the cheapest of the five builds, weighing at around 19.42lbs. In that regard, more money does not get you significant weight savings, apart from the Force eTap 2X build that weighs 18.25 lbs.

Some features that are common for all five builds include DT Swiss 350 front and rear hubs, Easton bars, stems, and seat posts, Sapim Race spokes, and WTB Silverado saddles.

The SRAM Force 650B build is the burliest and heaviest, but it also offers the highest off-road prowess thanks to its wide tires. It is also the most expensive build, along with the Force 1X model.

If you want the best possible shifting and the most modern technology, get the Force eTap model with wireless shifting that delivers 24 gears and costs $200 less than the highest-priced models.

All in all, these five Stigmata models are well-rounded, balanced, and the components fit together like a puzzle, which translates to a smooth performance on gravel roads without any hiccups.

Santa Cruz wanted to make Stigmata attractive to different types of gravel fans, so it offered it with 650B and 700C wheels.

The last three builds also come with an option to select Santa Cruz Reserve carbon wheels, which is an upgrade that will cost you $1,200.

When it comes to the rubber, Santa Cruz Stigmata navigates between Maxxis Ravager EXO 40C and Maxxis Rambler 40C on the 700C models, and WTB Ranger 2.0 on the 650B model.

All three models provide more than enough traction and grip on loose dirt roads, with side knobs delivering confidence when cornering as well. If you plan to stick to paved roads or hardpacked gravel, they might even prove to be too knobby at times.

Moreover, the tires on all Stigmata models are set up as tubeless, so you can safely explore the path less traveled without fearing thorns or pinch flats.

Sure, at first glance Stigmata looks mean and attractive enough to draw the attention of any rider looking for a capable gravel bike. However, the real love story begins once you hop on and get a feel for its refined handling that stays right in the middle between being demanding and forgiving.

Thanks to a well-balanced geometry that offers 69mm of trail, the handling is neither too quick, nor too stable. It’s right in between the two extremes.

However, that does not mean Stigmata is boring. It’s exciting to ride both when you’re racing and when you’re taking it easy on a multi-day trip.

Geometry-wise, we’ve already mentioned that Stigmata is now longer and more stable than before. The reason for that is the 71° to 72° head tube angle that makes it slacker and extends the wheelbase to a range between 1009mm and 1053mm, depending on the size.

However, compared to before, the chainstays have been shortened a bit, which means the rider can be in a more aggressive position, without making the bike too long and “too safe.”

That said, Stigmata’s geometry does not differ too much to the majority of gravel bikes we’ve looked at and reviewed thus far. It seems that most major manufacturers have managed to agree on the “sweet spot” for gravel bike design.

When it comes to sizing, Santa Cruz Stigmata is available in five frame sizes. To get the right one, refer to the table below, or check out the complete geometry chart on the website.

Is the Santa Cruz Stigmata a gravel bike?

Yes, Santa Cruz Stigmata is a purebred gravel bike with drop bars and gravel-specific geometry. It’s compatible with 650B and 700C wheels and has clearance for up to 45mm/2.1″ wide tires. You can use Stigmata for gravel racing, bikepacking, gran fondos, and even road riding.

How big is Santa Cruz Stigmata?

Santa Cruz Stigmata is available in five frame sizes, from 52cm to 60cm. Therefore, it fits riders between 5’3″ and 6’5″ tall, which is a pretty wide range. Its top tube is not parallel to the ground but slightly slanted, so there’s enough standover clearance even for short riders.

How much does a Santa Cruz Stigmata weigh?

Santa Cruz Stigmata weighs between 20 lbs and 18.25 lbs, depending on the wheel size and the components. That’s an excellent weight considering this is a gravel bike with burly wheels and tires. Stigmata is only available with a Carbon CC frame which explains the low weight.

Where is Santa Cruz manufactured?

Santa Cruz frames are manufactured abroad, in Taiwan and China. However, the frames pass the final inspection in the USA, where the complete bikes are assembled and shipped to retailers and customers. This way, Santa Cruz minimizes expenses while ensuring top-end quality.

What are gravel bikes?

Should You Buy a Santa Cruz Stigmata?

If you compare Santa Cruz Stigmata to a few other cheaper but similarly spec’d gravel bikes we’ve reviewed on this website, you might wrongly conclude that there’s more value for your money elsewhere. This bike is more expensive than the average, no doubt.

However, cheesy as it sounds, it is really the only bike you need.

With Stigmata, you get a perfectly-dialed gravel bike that’s ready to race, go on Sunday group rides, or accept frame bags and head out on a week-long bikepacking expedition.

Therefore, its main value is mirrored in its versatility, making it a phenomenal choice for riders who are not on a tight budget and love doing a little bit of everything when it comes to gravel and CX riding.