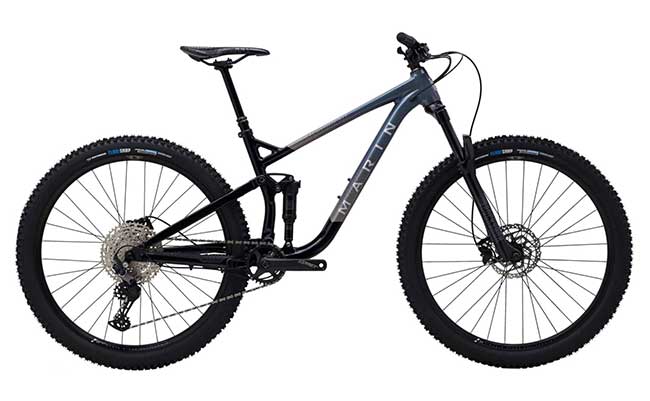 Nothing about the design of the Rift Zone 29 2 screams “radical”, and that is to its advantage.  At no point did the engineers decide to go to an extreme, sacrificing the benefits of one end of a spectrum for those of another. This means the rider gets a bike where the specs fall comfortably among tried and true standards.

A 425 mm chainstay may be considered toward the shorter end of standard for mountain bikes rocking 29-inch wheels. This may suggest that the designers were aiming for a nimble machine able to get its front wheel up over some of the heftier logs out there at the cost of possibly coming up in the air while chugging uphill.

However, to prevent this, the rider’s weight is kept further forward on the frame with a 76-degree seat tube angle, and a healthy overall wheelbase of 1213 mm (for a large-sized model) adds to this stability.

Maybe after winning a few races, it might behoove a rider to have a bike built to extremes– i.e. one where stability takes precedence over agility or vice versa– but for the rider who is still refining their preferences, the Rift Zone 29 2 resides securely in the Goldilocks-zones.

The construction of the Rift Zone 29 2 is another feature that seems to wisely aim for the middle.

The series 3 6061 aluminum frame offers the rigor to handle hardcore terrain while sparing the rider’s spine from some of the more tedious jolts they might experience on the trail. It is both lightweight and durable, not as durable as a carbon-fiber frame, for certain, but also not as expensive as a carbon-fiber frame, keeping the cost of the bike reasonable for someone looking to dive into the sport.

Continuing to be a bike that wants the best of both worlds, the Rift Zone 29 2 boasts a 148 mm wide rear hub and a 110 mm hub upfront, creating a stiffer wheel and encouraging the rider with an attack-the-trail mindset. The MultiTrac suspension platform, however, adds a healthy dose of comfortability and smoothness.

This combination of comfort and toughness could lend well to someone who is thinking of trying their hand at a bit of enduro riding as well.

Get the Model From JensonUSA 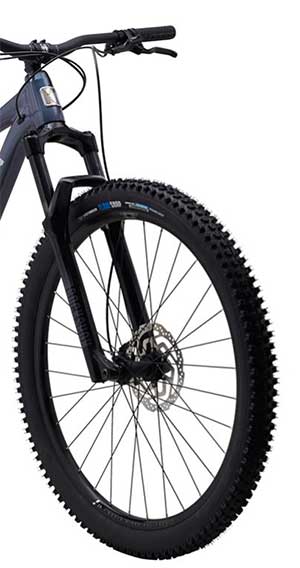 The 29-inch wheels offer better stability and rollover capability than their 27.5-inch counterparts. So the rider should have little to fear when taking on rugged rock gardens or twisted roots across the trail. They may not be as dexterous as the smaller wheels, but why go around obstacles when you can go over them?

The 2.35 inch wide tires are toward the wider end of the mountain bike spectrum, providing more rubber to grip the ground while still maintaining speed on rugged trails.

The rims are, once again, perfect for someone getting into the serious fun of mountain biking. They are disc-specific, so a rider can kiss those rim brakes goodbye and embrace the power of hydraulic stopping. Though they don’t come with tubeless tires, they are compatible with tubeless for anyone tired of their rides ruined by unannounced flats.

One of the things that makes this an ideal bike to start really getting into mountain biking is that many of the components are quality components, but not top of the line.

The reason this is good is that they are often the parts that will wear the most and require replacement. This leaves the rider the opportunity to upgrade their ride piece by piece without breaking the bank.

The Deore drivetrain delivers Shimano’s well-renowned shifting expertise in a reliable package that still keeps the overall cost of the bike low. The RockShox Recon Silver RL 29 provides a cushion to ride on in the front fork with 130mm of travel.

Easily adjustable to suit the amount of rebound any individual rider may be looking for while also being another component that is reliable but still doesn’t drive the overall price of the bike through the roof. Similarly, the RockShox Deluxe Select R that makes up the rear suspension is reliable, adjustable, and RockShox offers a wide array of upgrades.

Marin offers the Rift Zone model at two other price points. For half a grand less, the Marin Rift Zone 1 offers similar performance and stability with the same profile as the Rift Zone 2, as well as the rollover capabilities of a 29er. Many of the differences are aspects the rider may choose to upgrade at a later date anyway.

For instance, the Crown Gem tires from Vee that the Rift Zone 1 comes equipped with may not perform as well in wet or muddy conditions as Vee’s Flow Snap tires on the Rift Zone 2, but that may not factor in for riders used to dry or desert landscapes.

The difference that might be most obvious between the two models would probably be the RockShox Select R Debonair rear shock absorber on the Rift Zone 2.

Lacking any rear shock absorber, some may find the ride on the Rift Zone 1 a shade less comfortable over time, limiting its use on longer rides or enduro terrain.

A further upgrade in the smoothness of the ride comes with the Marzocchi Bomber Z2 front suspension of the Rift Zone 3 as well as the Fox Float DPS in the rear.

Staying with the Shimano drivetrain, the Rift Zone 3 takes a step up to the SLX line. This offers refined operation, easier shifting, and a big drop in weight as many of the SLX components are sleeker and designed for speed.  The crank, for example, is manufactured hollow while the Deore cranks are solid.

See Other Models on JensonUSA

Yes, the Marin Rift Zone 2 creates a balance between comfortable geometry and performance-driven features that make it more than capable of handling all sorts of mountain biking terrain. The front and rear suspension helps cushion the impact of bumpy trails, while its overall geometry is simultaneously suited for long endurance rides and gnarly descents.

How much travel does the Marin Rift Zone have?

The Marin Rift Zone has 125mm of rear travel and 130mm of travel on its front suspension.

Does the Marin Rift Zone have a dropper post?

Yes, the Rift Zone has a TranzX dropper post which has 150mm of travel in the Large frame size.

How much does the Marin Rift Zone weigh?

Is the Marin Rift Zone a good climber?

Yes and no. The Rift Zone 2’s geometry makes it comfortable for long and steady climbs, while it’s heavier weight will slow you down on the steep stuff. With confident suspension systems and great tires, the Rift Zone 2 has plenty of traction on climbs, but won’t be quite right for the elite climbing crowd.

The Rift Zone 29 2 could make a good match for a rider looking to get serious about their mountain biking obsession. It offers a low, sleek stance for sustained speed and stability, as well as a suspension system capable of taking on enough of the shock to allow for comfort during a long ride.

With a respectable array of components and plenty of options for later upgrades, the Rift Zone 29 2 speaks to the rider looking to grow in their passion for trail riding.

See the Models on GovVelo

Or see the models on Jenson USA