Everything You Need To Know About Fat Bikes

Fat tire bikes are not fitness vehicles, but they will get you where you are going no matter the terrain, no matter what the conditions. Sand, snow, mud – they are your friends!

The key feature of fat bikes, or fatties, are their monstrous tires that range from 3.7” to 5.05”.

Such tires can be used at extremely low tire pressures which, in turn, allows greater tire surface area. The big tire surface area greatly increases traction as well as suspension. Riding at previously unheard-of 5psi will literally make a molehill out of any mountain creating a bouncing or floating feeling.

Do not expect a fat tire bike to be the quickest bike you have ridden!

Do expect a fat tire bike to get you where you are going even if your ride includes heavy snow or fine grain sand. When a cyclocross bike gets gunked up in the mud, a fat bike rides right through it. If a beach cruiser has you restricted to riding the boardwalk, the fat tire bike can ride you right down to the water. When a winter storm has most riders bundled up inside, the fat bike is raring to get out into the worst weather the fourth season has to offer.

Related: All You Want To Know About Bike Computers

Fat bike bikes, or fatties, are a product of some rough environments and conditions. When mountain bikes became popular in the 80’s, people began traversing backcountry trails and the limitations of the mountain bike were also being discovered. In 1987, the first Iditabike was held in Alaska on the same dog mushing trails of the Iditarod. When all the Iditabike riders were dismounting due to stretches of ice and snow, it was clear that the mountain bike had some evolving to do.

Some of the early variations of fat bikes included mounting two or three tires side by side. This was known as the tandem rim concept. Alaskan bike shops began removing the inner walls of the numerous side by side rims, forming a singular wide rim. These early versions of the fat tire bike were limited to the wheel dropout spacing. At the same time in New Mexico, Ray Molina began manufacturing the Remolino rim (3.1inch) to conquer sand dunes and arroyos.

Read Next: All About Bikepacking 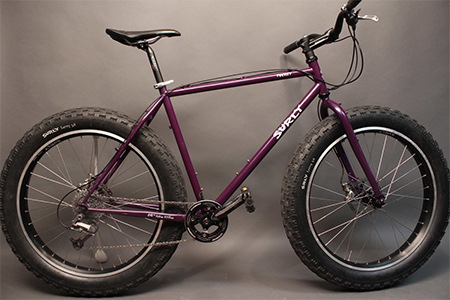 Surly Pugsley – The first fat bike in the world

A thorough history of fat bikes would not be complete without mentioning Surly’s Pugsley bike. Introduced in 2005, the Pugsley was designed by Dave Gray, Surly’s second employee. The Pugsley came about to supply the growing demand that the Remolino had created for fat rims and bikes. Gray has stated that the biggest design challenge of the Pugsley was getting the chain around the fat tire. He and his team solved this problem with a wide crankset and an offset frame. And thus, the first mass-produced fat bike was introduced to the cycling community.

Fun fact: Other names that were considered for the Pugsley include: Fat Bitch, Soccer Mom, Slapfighter, American, Moosepaw, and Flabalanche. 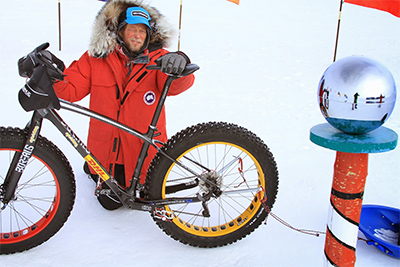 Fatbikes were created to blaze trails and to ride the fourth season, but no one could have foreseen just how far these fatties would wander. In 2014, Daniel Burton was the first person to cycle to the South Pole on a fat bike. Starting from the coast of Antarctica, Burton rode a Borealis Yampa 775 miles over the course of 51 days to reach the South Pole. Since Burton’s successful attempt, all fat bike manufacturers have struggled to get their bikes to the south pole.

Fatbiking is making adventurers out of local riders too. Fat bikers are not limited to previously ridden trails or trails at all. Fatbikes eat up unimproved railroad tracks, unrideable sandy stretches, and ungroomed winter tracks. There is no doubt that fat bikes will be creating and extending the trails of tomorrow.

As of 2012, December 1st, is now Global Fat-Bike Day. But as fatbike popularity continues to grow more fatbike events are popping up all year round. Currently, the largest fatbike series in the US is the 45NRTH Great Lakes Fat Bike Series. Featuring 7 mass start races beginning in December and ending in mid-February, the 45NRTH Great Lakes Fat Bike Series is sure to challenge even the most experienced fatty riders. 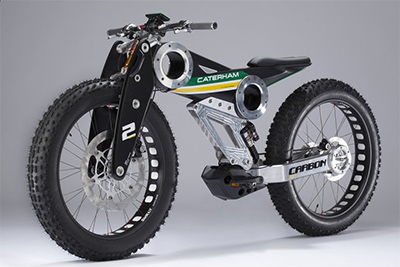 Fat bikes to E-fat motorcycles, what will be next?

Modern fatbikes have come a long way since the Pugsley. Largely borrowing from the mountain biking world, new materials and designs have greatly reduced the weight involved with fatbikes. One of the primary changes in design comes by way of the symmetrical design. Where the Pugsley used an offset design, most fatbike manufacturers now use the symmetrical design meaning the rear triangle is symmetrical with equal spacing of the left and right dropouts from the center of the frame.

Blurring the line between motorcycles and bikes are the new electric fatbikes. With the additional weight involved with 5” tires, fatbikes benefit from pedal assist more than their mountain bike counterparts. These E-Fatties truly shine when pulling a sled/trailer or when they are weighed down with supplies and equipment.

Where Will These Fatties Go Next?

What To Look For When Buying a Fatty 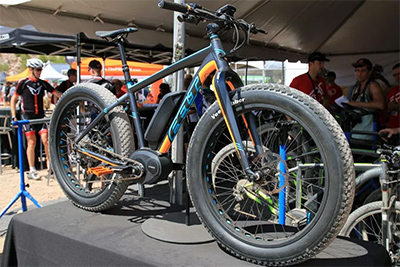 The first question one should ask themselves when purchasing a fat tire bike is, how fat do I want to get? The answer to this question lies in the type of riding you will be doing. There is a surprising difference between a plus tire and a mid-fat tire and what you want depends on how you will be riding the bike.

LBS will be able to ascertain which sized fatties are most suitable for local terrains and conditions. It is recommended that you purchase a frame that accommodates the largest wheelset you will want because you can later install a smaller wheelset. Whereas fat tires will not fit on frames built for plus tires.

The next consideration when buying a fat bike is, how much suspension do you want. Fatties are now being built with full suspension frames like the Trek Farley and the Salsa Bucksaw. The majority of fatties now being sold are rigid, but if you’re planning on using this fatty as your primary mountain bike then you should strongly consider front shocks. Despite the extra weight and cost of front suspension, you will almost certainly use the extra travel when riding trails that only fatties can reach.

Read Next: Best Fat Tire Bikes You Can Get