One of the biggest debates in the cycling world has to do with bike tire valves — Presta vs Schrader. Seemingly, they’re a small and trivial part of your bicycle, but that can’t be further from the truth.

Presta and Schrader are the two most common valve types seen on bike tires nowadays. What’s the difference between the two? Which one should you choose? And how to use them properly?

These are just some of the questions that we will answer in this guide to help you get a better understanding of the topic and become a better rider.

What Bike Tire Valve Types Are There?

The two most common bike tire valves types are Schrader and Presta.

Schrader is the same type seen on cars, so it makes pumping tires easy on any gas or service station. They’re more commonly seen on inexpensive bikes.

The Presta vs Schrader commotion has been up for years. Here are the main differences between the two.

What Is a Schrader Valve? 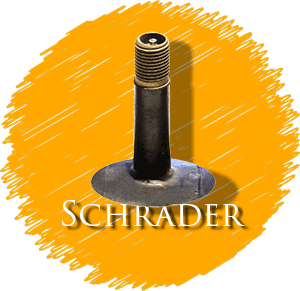 Schrader valves are wider and typically shorter than Presta valves. They are the valve type that you see on car tires, so they are more universal than Presta.

Schrader valves consist of a threaded outer wall (to accept a cap) whose bottom half is wrapped in rubber and a spring-loaded check valve in the center.

The valve allows airflow in one direction only, so to pump air into the tire, you need to press the inner pin down. This also allows you to check the air pressure in the tire.

What Is a Presta Valve? 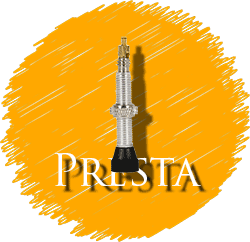 Presta valves are half as thick as their Schrader counterparts and usually longer. They’re made entirely out of metal, taper towards the top, and are usually completely threaded.

Presta is slightly more challenging to use because it has a locknut instead of a spring-loaded valve to ensure the air stays in the tire.

Almost all Presta valves nowadays have a removable inner core, which can pose a problem for inexperienced riders. If you unscrew the locknut too much when attempting to pump air into the tube, you may accidentally unscrew the entire core and lose all of the air in the tire.

Actually, we weren’t fully honest when we said there are two types of bike tire valves. There’s another one called “Dunlop.”

This is a valve type commonly seen in Europe and Asia on affordable city and trekking bikes. It looks like a fatter and shorter Presta valve.

Dunlop valves can be inflated with Presta-compatible pumps.

What Are The Differences Between Presta & Schrader Valves?

Even though both do the same thing, Schrader and Presta valves have more differences than similarities.

First of all, Presta has additional parts compared to Schrader:

The valve core on modern Presta valves is removable and can be replaced if your tire starts leaking air or if you gum up the core when adding tire sealant.

The valve lockring sits on the outer part of the valve and screws down to secure the valve on the rim and prevent it from moving up and down.

Finally, the locknut sits on top of the valve and holds the valve core together. You need to unscrew it when pumping air or replacing the core.

On the other hand, Schrader valves are a lot simpler than Presta. They are made of an outer shell and a removable core with a spring-loaded check valve and a rubber/plastic cap on top.

Presta vs Schrader – Which One To Choose?

Presta valves are made specifically for bicycles, so there are many reasons why you should choose them over Schrader whenever possible.

However, Schrader valves are more practical to use because their design is simple and they allow you to inflate the tire on any car service station. Yet, that alone is not a good enough reason to use them on performance-oriented road and MTB bikes.

How To Inflate a Presta Valve? 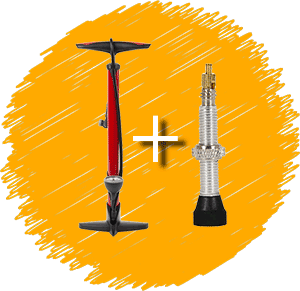 How To Inflate a Schrader Valve? 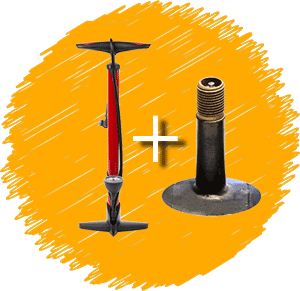 Inflating a Schrader valve is as simple as it can be. There’s no chance to do anything wrong here.

Presta vs Schrader valves are compatible with different types of pump heads. You cannot pump air through a Presta valve with a Schrader-specific pump head and vice-versa.

Valve adapters are easy to carry in your kit and mean a lot when you don’t have a suitable pump.

Such an adapter lets you pump your tires with any air compressor you can find at a gas station or a car service station.

A Schrader valve adapter is basically a small brass fitting that you can easily keep in your kit at all times in case your Presta-specific pump malfunctions or another type of emergency occurs.

TIP! When doing longer rides, always carry a suitable adapter (especially when you have a Presta valve), because otherwise, you won’t be able to inflate your tire on most service stations that are meant for cars. No matter what bike tire valve type you have – always carry an adapter!

Can You Mismatch Valves?

Mismatching Presta and Schrader valves is challenging and definitely something we don’t recommend.

Technically, you could use a Presta valve with a rim made for Schrader valves because the opening is more than wide enough. However, because the Presta valve is narrow, it means it will move around, so you risk getting the base of the valve cut by the rim.

Putting a Schrader valve in a rim designed for Presta valves is impossible because the opening is not wide enough. You could widen it by drilling, but that could damage the structural integrity of the rim, especially when it comes to carbon rims.

Is Presta or Schrader Better When Going Tubeless? 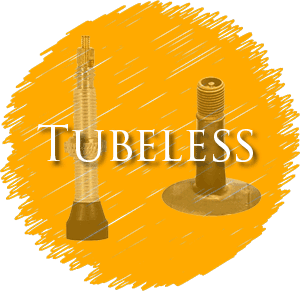 When going tubeless, both Schrader vs Presta valves can work. It depends on the type of the rim that you are using.

However, Presta valves are a much better choice. Nowadays, there are tubeless-specific Presta valves with removable cores that makes adding sealant pretty easy.

Moreover, Presta valves allow you to pump air into the tire at high pressures, which is necessary in order to push the beads of the tire against the rim and seal it up.

Find out more about tubeless tires.

Pumps – Which One To Choose?

Presta-specific bike pumps have a narrow rubber gasket in the pump head that fits snuggly around the valve. It is not wide enough to fit on a Schrader valve.

On the other hand, Schrader bike pump heads are not only wider, but also have a pin in the center that presses down on the spring-loaded check valve.

However, most bike pumps today are compatible with both Schrader & Presta valves. These are called dual-head designs and come in three main types:

Check Out the Best Bike Pumps

What is a Schrader Valve?

A Schrader valve is a type of valve used on bikes, cars, motorcycles, and other vehicles. It consists of a metal outer shell with a spring-loaded check valve inside. It is easy to inflate on any car service station.

What is a Presta Valve?

A Presta valve is a type of valve made specifically for bicycles. It is longer and narrower than Schrader valves, built to endure higher air pressures (upwards of 125 PSI). Presta valves are found only on bicycles.

How to remove a broken Schrader Valve?

To remove a broken Schrader valve core, you need a special tool that fits inside the valve and unscrews the core counterclockwise. After that, you can insert a new core by screwing it down in a clockwise direction.

How to fill Presta with Schrader pump?

Presta valves can be filled with Schrader pumps by using Presta to Schrader adapters that fit on top of the valve.

How to fill Schrader with Presta pump?

Schrader valves can be filled with Presta pumps by installing a Presta to Schrader adapter on the pump head.