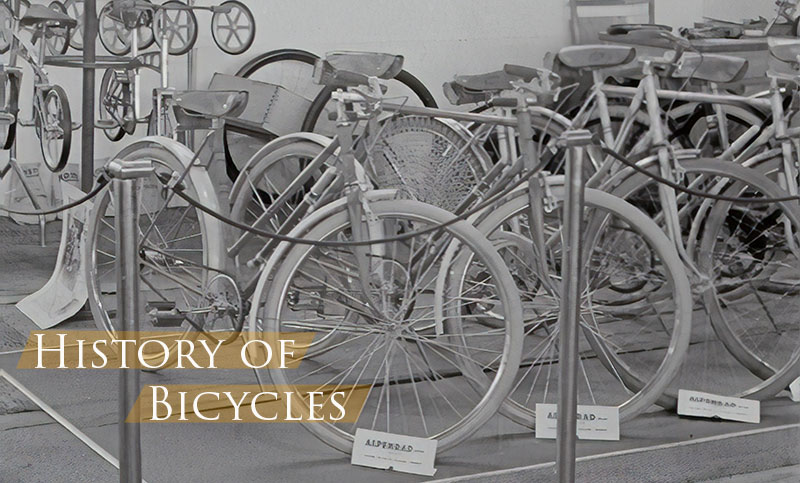 We all know that bicycles have been around for years but what exactly is the history of bicycles?

We’re going to be drilling down to the inventors and their creations that helped develop the bicycle into the machine we know and love today.

The two-wheeled machine has evolved over the course of a century and thanks to several inventors, we aren’t still riding penny-farthings!

So let’s begin the history lesson! 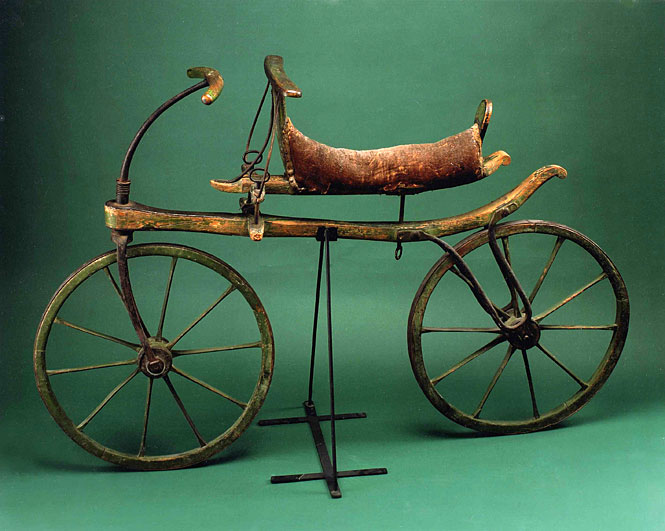 Designed and invented by German aristocrat, Karl von Drais in 1816, the Draisine (also known as the “pedestrian-accelerator”) was the first two-wheel vehicle for personal transportation.

The concept of the Draisine was simple. To use the Draisine, you push your feet against the ground. You steered it using the front wheel.

It was made up of two wooden carriage wheels, a wooden bench that the rider would straddle, and an elementary steering system. Unlike model bicycles, there was no pedaling involved.

Drais believed that his invention would replace horses as he saw it as a more economical and efficient way of traveling.

However, what Drais didn’t fact in was the practical problems of the Draisine. It was easy to fall from the “running machine” and shoes would wear out quickly.

There was also the fact that it was expensive and heavy. It weighed around 50 lbs. The roads weren’t kind to it either and it made using it difficult.

It was due to these problems that the Draisine became nothing more than a toy for young aristocrats and was known as a ‘hobby horse’ and fell out of popularity.

Perhaps the Draisine was ahead of its time as we see balance bikes as the ideal way to teach children how to ride. 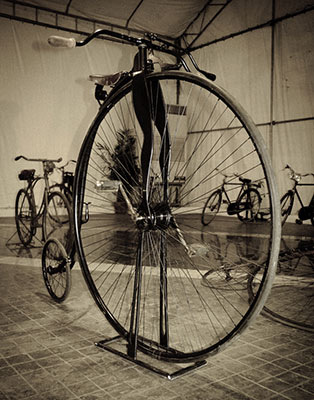 Another key part of the history of the bicycle is penny-farthing. Also known as the high-wheel bicycle, high-wheeler, and believe it or not, the ordinary!

It has a large front wheel and a much smaller rear wheel. The name penny-farthing came from the British penny and farthing coins. The penny is much smaller than the farthing, not dissimilar to the wheels!

Invented in 1871 by James Starley, a British engineer, the penny-farthing didn’t have a huge life span, as in the 1890s, the safety bike was developed. Though even in its short life span, it was very popular and was known as the first bicycle.

During the penny-farthing era, James Starley made lots of developments with how bicycles work, how to improve their ride, etc. This development meant that things such as ball bearings, solid rubber tires, and steel frames with hollow sections became the standard for bikes. Bicycles were becoming lighter and smoother to ride so this was a key moment in the history of bicycles.

Penny-farthings were incredibly quick, at the time, there wasn’t anything quicker on the roads. However, this also meant that they were dangerous so not everybody was keen to ride them, understandably!

There was a big risk of falling over the handlebars head-first. This led to makers of the bicycles developing different types of handlebars, including the “mustache” style, which was designed to ensure that you didn’t come off the bike head-first.

Sadly as this was being developed, the safety bicycle had started to catch on so these development changes were largely in vain.

The safety bike is possibly the biggest development in the history of bicycling and it’s still around today, we just don’t know it as the “safety bike”!

As penny-farthing was so dangerous but the concept of bicycles was clearly popular, the need for something safer was necessary and so the first modern bicycle was born!

Designed by English engineer Harry John Lawson in 1876, these modern bikes appealed to people who wanted to take fewer risks. They also benefited from the fact that these bicycles were lighter and mechanically less complicated.

In addition to this, the rider’s feet could reach the ground with ease and the pedals powered the rear wheel. This was a step ahead of the penny-farthing. You can immediately see why this would make everything safer.

For a short period of time, this style of bicycle used solid tires, the same that had been used on the penny-farthing. Whilst there is nothing wrong with this style, they aren’t the most comfortable, nor efficient.

So in 1888, John Boyd Dunlop developed the pneumatic tire. We’re sure the name Dunlop is familiar to you!

With this new tire, the modern bicycle became the most popular form of human-powered transport around – a turning point in the history of bicycles!

These days bicycles are largely based on this design, with developments continuing. Component weights have decreased, braking has become more effective, and more gears and the introduction of suspensions have meant that the bicycle has grown from strength to strength.

The modern bicycle is what we ride today, of course, with many years’ worth of upgrades but the concept remains largely the same. 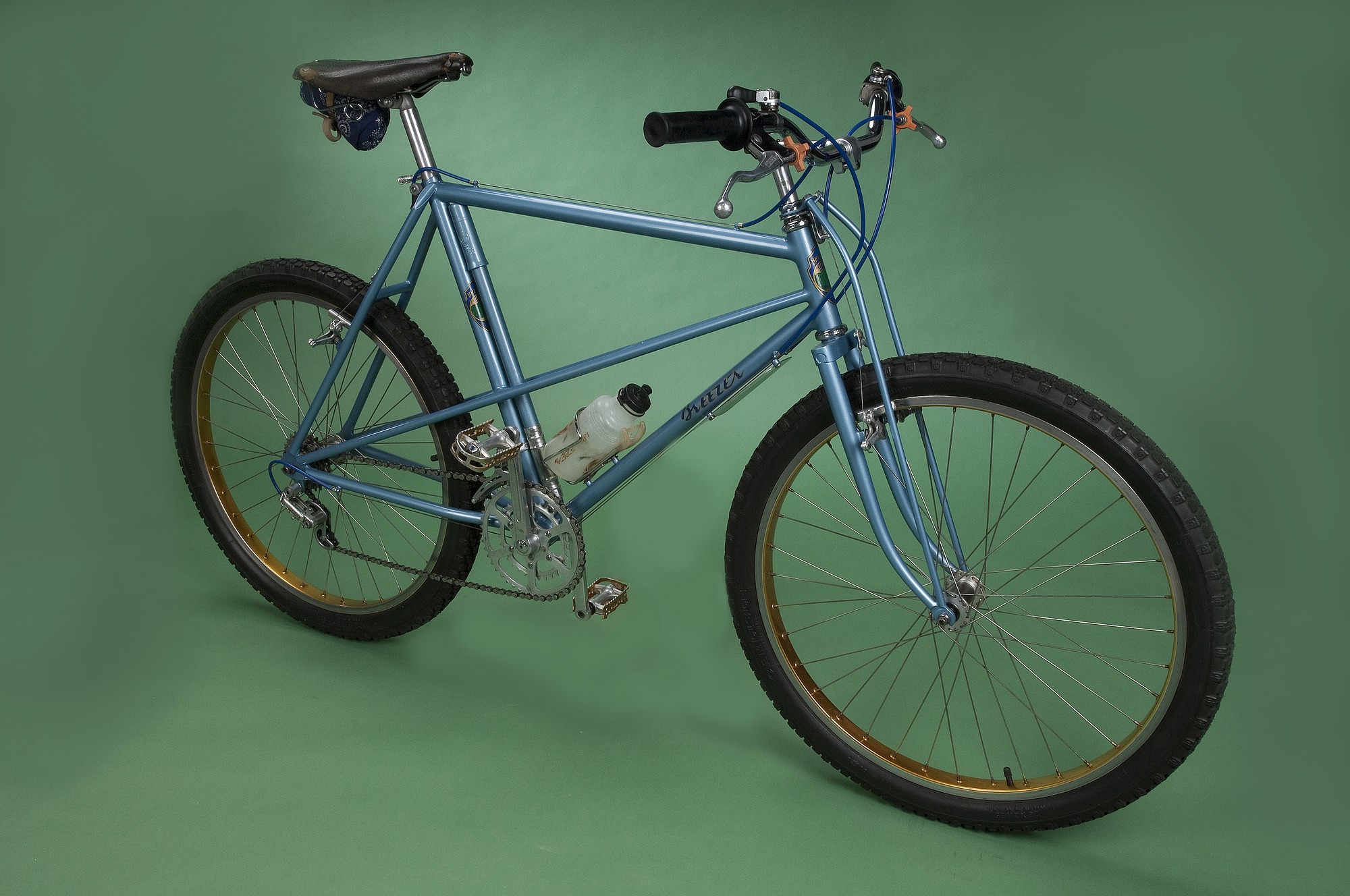 There are many out there who claim to have invented mountain biking and we may never know exactly who did but it is generally accepted that the riders of Marin County, California were the forefathers of mountain biking. They modified their Schwinn Excelsior bikes.

Having said that, it is also accepted that Joe Breeze created the first purpose-built mountain bike in 1978, known as the Breezer Series 1.

Interestingly, around the same time, Gary Fisher, Charlie Kelly, and Tom Ritchey also started to produce their own version of mountain bikes.

Ritchey manufactured frames, that Kelly and Fisher accessorized. These bikes were sold under the name MountainBikes. Sadly, the company didn’t last very long as their friendship ended.

As Ritchey left the relationship, Fisher and Kelly went on to create Fisher Mountain Bikes. Ritchey went on to produce frames.

To be honest, mountain bikes weren’t taken too seriously to start with.

However, when the sale of mountain bikes kept growing, in the late 70s and early 80s, there was a rise in developments for the mountain bike. Suddenly, it became important that frames should be lighter in weight and that people did want to see better-performing mountain bikes. They were here to stay!

This rise resulted in the first two mass-produced mountain bikes, the Specialized Stumpjumper and the Univega Alpina Pro.

By the 1990s, mountain biking had become a mainstream activity and you could purchase the bikes and gear in standard bike shops.

Then by the mid-2000s, mountain bike sales were still rising and this is when we started to see stores such as Wal-Mart stocking them.

Electric bikes have more of a history than people might think! They have been rising in popularity for the last 20 years or so. But surprisingly, you can actually trace the history of these bikes back 120 years.

It was two years later when Hosea W. Libbey invented another electric bike but this time it had two motors, two batteries, and two wheels.

When you were cycling on the flat, only one battery would work. As you started to climb, the second battery would kick in. Pretty clever thinking.

Another patent came along in 1898 by Mathew J. Steffens. His patent was the first rear-wheeled e-bike that used a belt along the outside, this created the power.

Whilst the development of these electric bikes kept going, so did the popularity of the motor vehicle. Sadly, it meant that the electric bike was forgotten about.

It wasn’t until the 1990s that the electric bike saw a comeback. Yamaha and Panasonic began developing new technology for batteries and motors. This was the start of the e-bike industry again.

A Japanese manufacturer whose focus was on developing torque sensors and power controls ended up releasing an electric bike called “The Zike”.

As we entered a new millennium, the electric bike industry began to see some strong growth. Production actually grew by 40% during 2002 and 2004!

The majority of this growth was happening in China. Sales in Europe and USA do not match that of China but they are growing every year.

Certain cities have implemented e-bike schemes in a bid to increase the use of these great machines.

When was the bicycle first invented?

The first bicycle was invented in 1816 by Baron Karl von Drais from Germany.

Technically not much like a bicycle, as we know by today's standards. It didn't have pedals and you had to run to make it work. This gave it the nickname "the hobby horse".

The first bicycle was made entirely of wood and had steel-rimmed wheels. It was heavy and weighed around 50lbs.

Who invented the first bicycle?

The first bicycle was invented by Baron Karl Von Drais and it was known as the Draisine after the inventor. It wasn't very successful and was quickly overtaken in popularity by the Penny-Farthing.

See the Best Bike Brands and Their Histories