In this Orbea Alma review, we’re going to take a closer look at the 11 different XC mountain bikes that make up this range.

There is an Orbea Alma XC bike to fit almost any price range, as well as any rider experience level.

Each bike has an Orbea Alma frame with XC geometry and 100m of front suspension travel.

They all come with a 12-speed drivetrain, and there are tons of different groupsets to choose from, which is one of the main differences between each Alma model

There are 11 models to choose from in the Orbea Alma series, with a wide price range fitting for amateurs, experienced mountain bikers, and elite XC racers. Let’s jump right into it.

The Orbea Alma series consists of hardtail cross-country mountain bikes. That means that they only come with front suspension and won’t include a rear shock. These bikes are meant for speed and shredding, not gnarly and rocky downhill trails.

Of the 11 available Orbea Alma XC mountain bikes, there are three main categories:

Orbea Alma series offers many different options when it comes to customizing your frame and groupset combination. There are Shimano and SRAM models to choose from, as well as different aluminum or carbon fiber frames.

The front fork suspension and wide tires will help you feel comfortable on all sorts of trails, while Orbea’s unique geometry will help improve your handling and confidence. 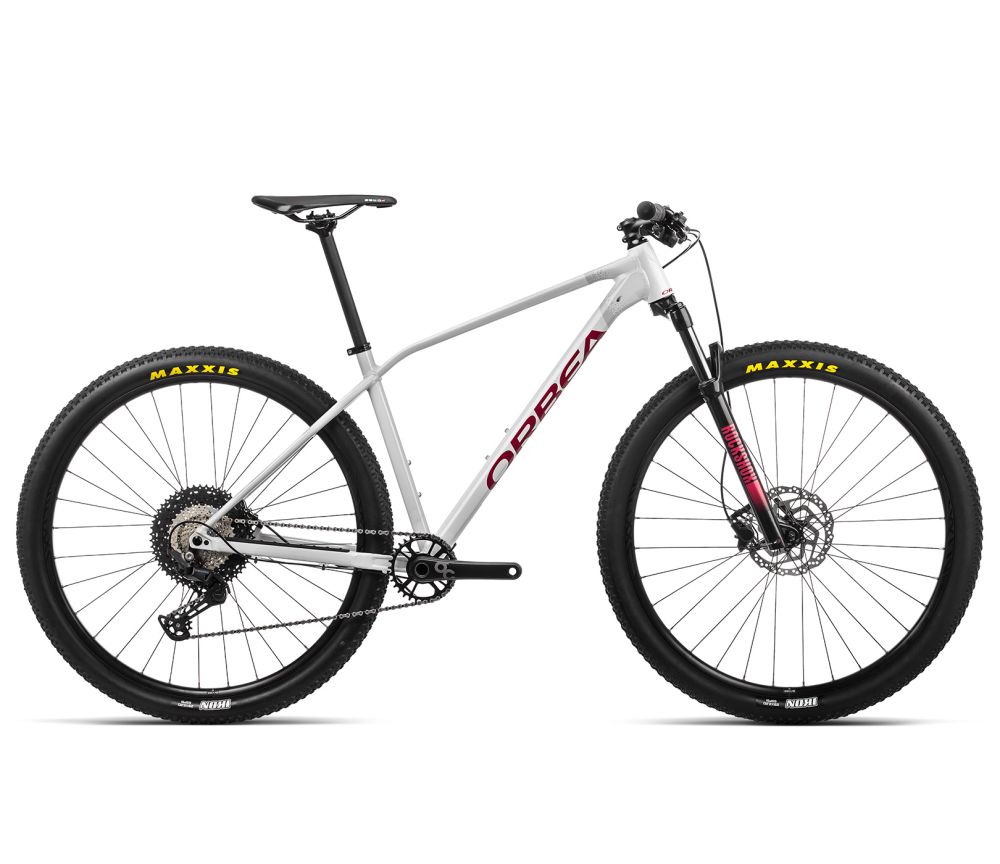 The most affordable of the bunch is Orbea Alma H30, a basic cross-country mountain bike with the high quality that you’d expect from Orbea. At $1,499, the Alma H30 is a fraction of the price of other Alma’s. But it does share many of the same characteristics as the higher-end bikes.

Maxxis Ikon 2.2” tires – which are also included on the Alma H20 and Alma H10-Eagle – are warped around Mach1 23c tubeless-ready rims. 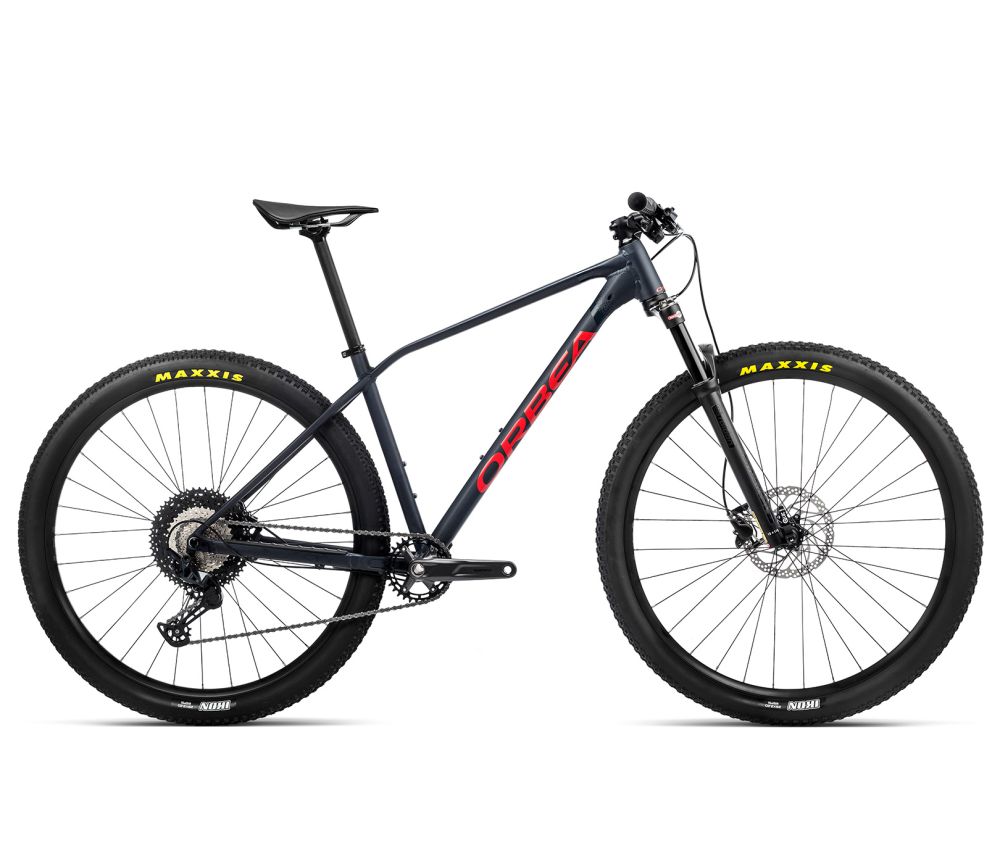 The Alma H20 is a small step up from the Alma H30, including better components and a wider gearing range. Made using the same Hydro Alloy aluminum frame with internal cable routing, the H20 also has the same Shimano hydraulic disc brakes as the H30.

One of the upgraded features is the SR Suntour RAIDON front suspension fork which offers 100mm travel.

While the rear Shimano Deore rear derailleur and shifters are identical to the H30’s, the Alma H20 features an upgraded cassette in the Shimano CS-M6100 10-51T. This 12-speed setup is better for racing as the 10T allows you to accelerate up to 28mph. By contrast, the H30’s smallest cog is 11T which can only help you get up to 25mph before spinning out.

The Maxxis Ikon 2.2” tires are identical to the H30s, whereas the chain and crank have been upgraded to Shimano components on the Alma H20. The Orbea Alma H20 is available for $1,899. 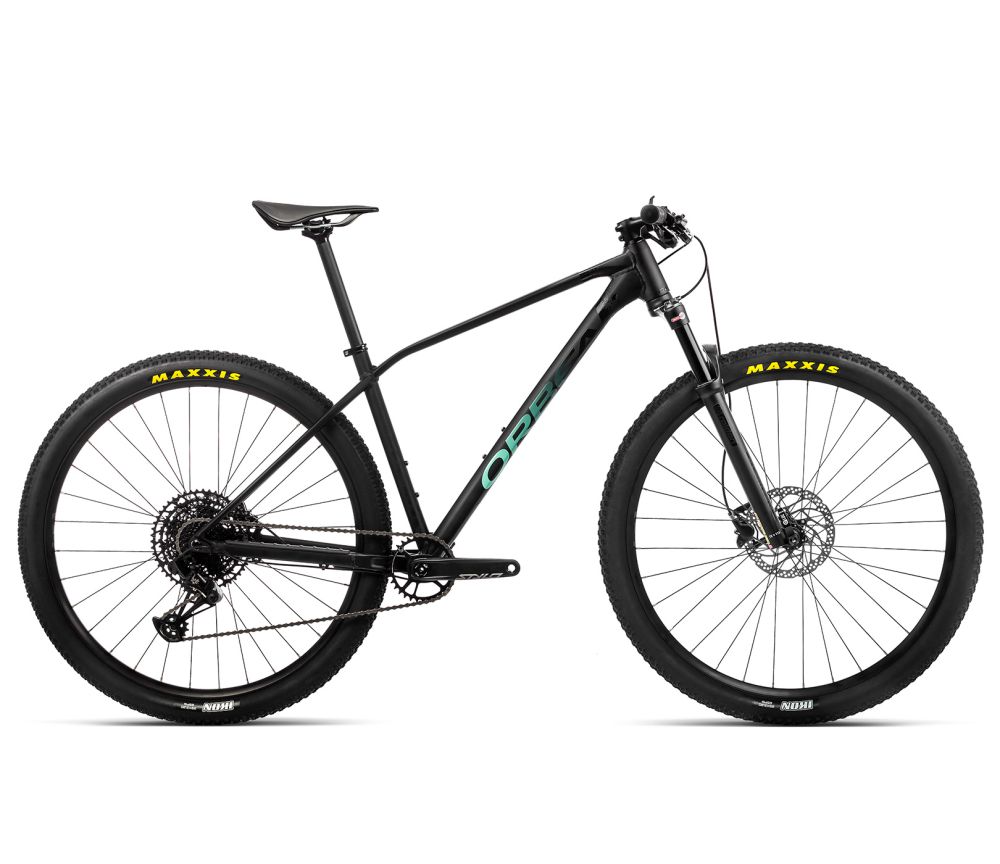 At $1,999, the Orbea Alma H10-Eagle offers a lot for its price range. The groupset is the most impressive part of the H10-Eagle package, with a series of SRAM NX Eagle components including the rear derailleur, shifters, and chain. The cassette included is an SRAM PG-1230 Eagle 11-50T which offers a similar gearing range to the Orbea Alma H30.

Another similarity is the Hydro Alloy aluminum frame with internal cable routing. The SR Suntour RAIDON front fork is the same fork that you will find on the Alma H20.

Overall, the Orbea Alma H10-Eagle offers high-quality SRAM NX Eagle components at a very reasonable price. It shares all the XC geometry as the Orbea Alma H30 and H20 models. 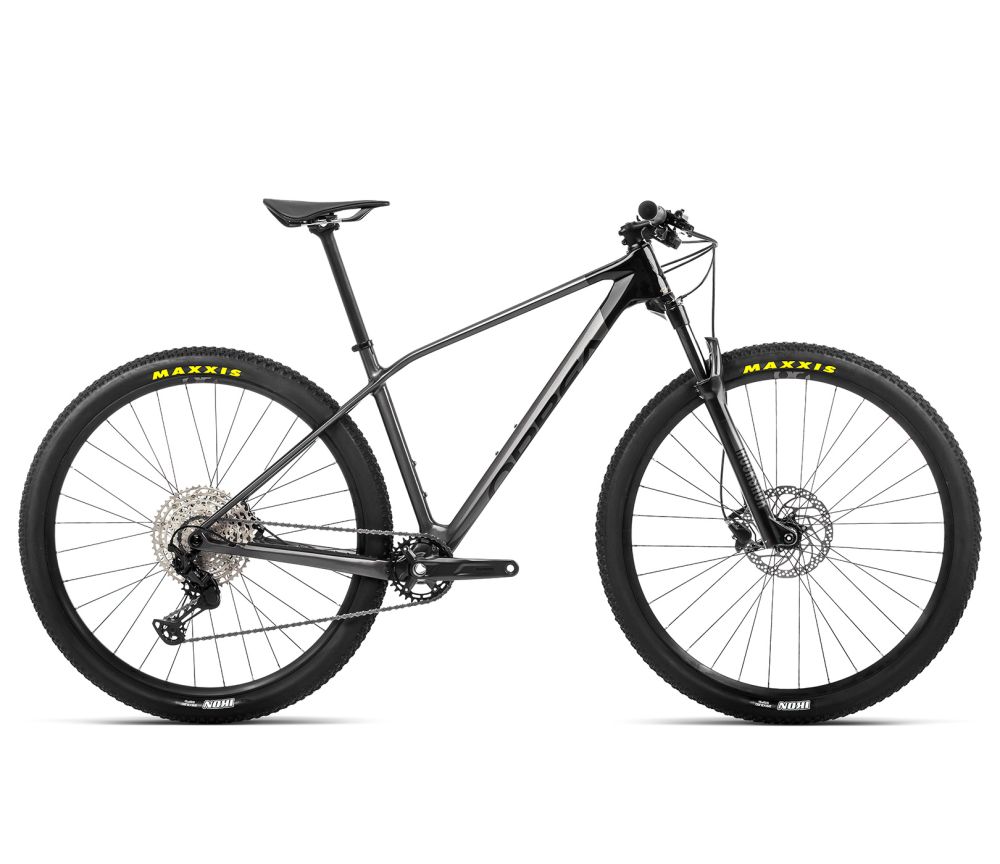 Alma M50 uses the same RockShox Judy Silver front fork with 100 travel as the Alma H30, but this time it includes Boost. The components are different from what we’ve seen in the H series. M50 comes with Shimano components. That includes an SLX M7100 rear derailleur, MT511 32T crank, and CS-M6100 10-51T cassette that is identical to the cassette used for the Alma H20.

The M50’s brakes are the same Shimano MT201 hydraulic discs used in the Alma H series. The same Maxxis Ikon 2.2” tires have been used too. 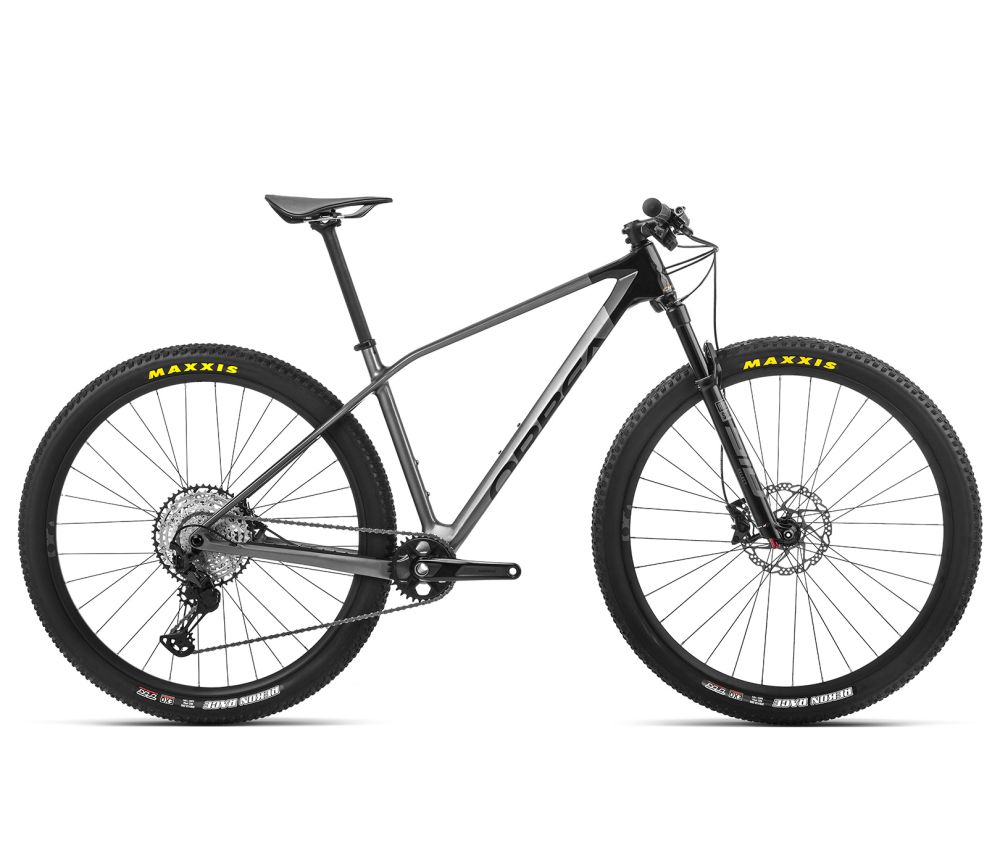 The Orbea Alma M30 shares the same carbon fiber frame as the Alma M50, but it does feature an upgraded fork in the RockShox SID SL RL with 100mm travel.

Alma M30 has the same tires and rims as all the previous Alma models, but it does feature a nicer groupset throughout. For $3,099, the M30 features a nice groupset, with a mix of Shimano components.

The Shimano XT M8100 Shadow Plus rear derailleur is the nicest so far in the series. Using Shimano MY611 32T crank, this is a match made in heaven.

Shimano CS-M7100 10-51T cassette is a slight upgrade from the cassette used in the Alma H20, while the Shimano M6100 hydraulic disc brakes are the first brake upgrade in the Alma series. There are also bigger and better tires in the Maxxis Reckon Race 2.35” pair wrapped around the same Orbea OC1 25c tubeless-ready rims. 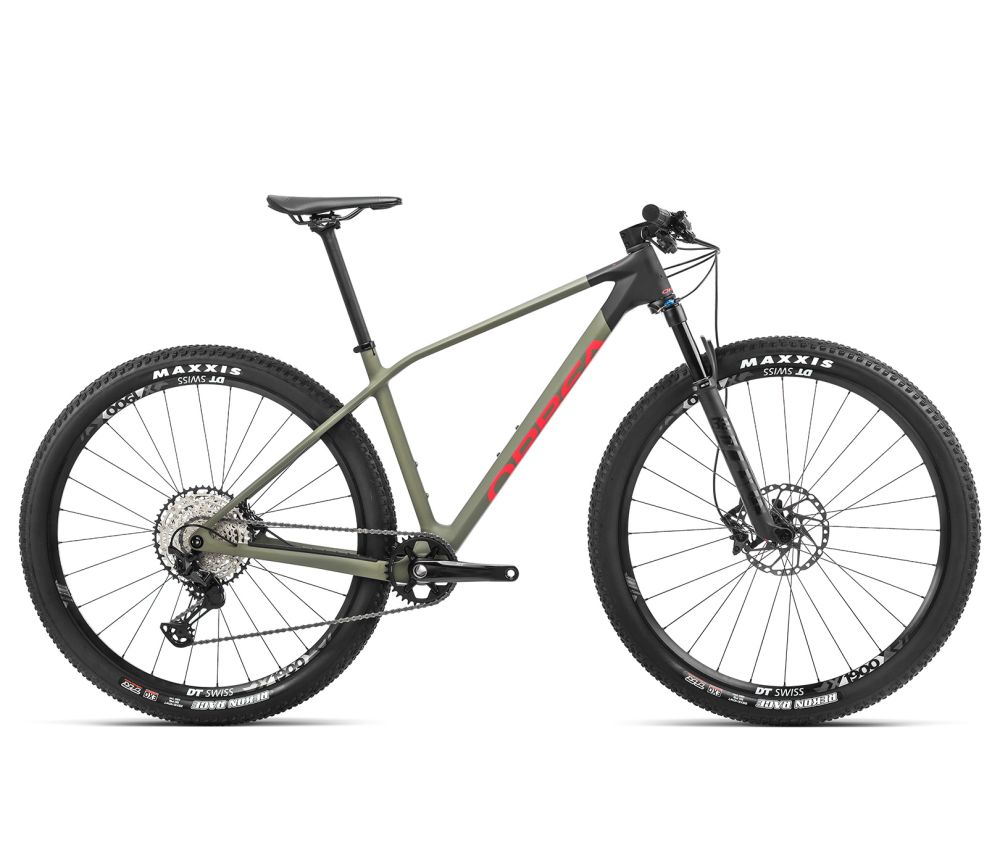 The last numbered bike in the Orbea Alma Series is the Alma M20 which uses the same carbon frame as the other Alma M models. At $3,599, the Orbea Alma M20 is very affordable for an XC mountain bike of this caliber. Especially one that includes components like this.

Shimano XT supplies the groupset for the Alma M20 including an M8100 Shadow Plus rear derailleur and the biggest crank we’ve seen so far in the M8100 34T.

While the Shimano M6100 hydraulic disc brakes and CS-M7100 10-51T cassette are the same as the Alma H30’s, the shifters and chain are upgraded to Shimano XT standards.

We couldn’t forget about the front fork. It has been upgraded to the Fox 32 Float SC Performance with Remote Push-Unlock and 100mm travel. 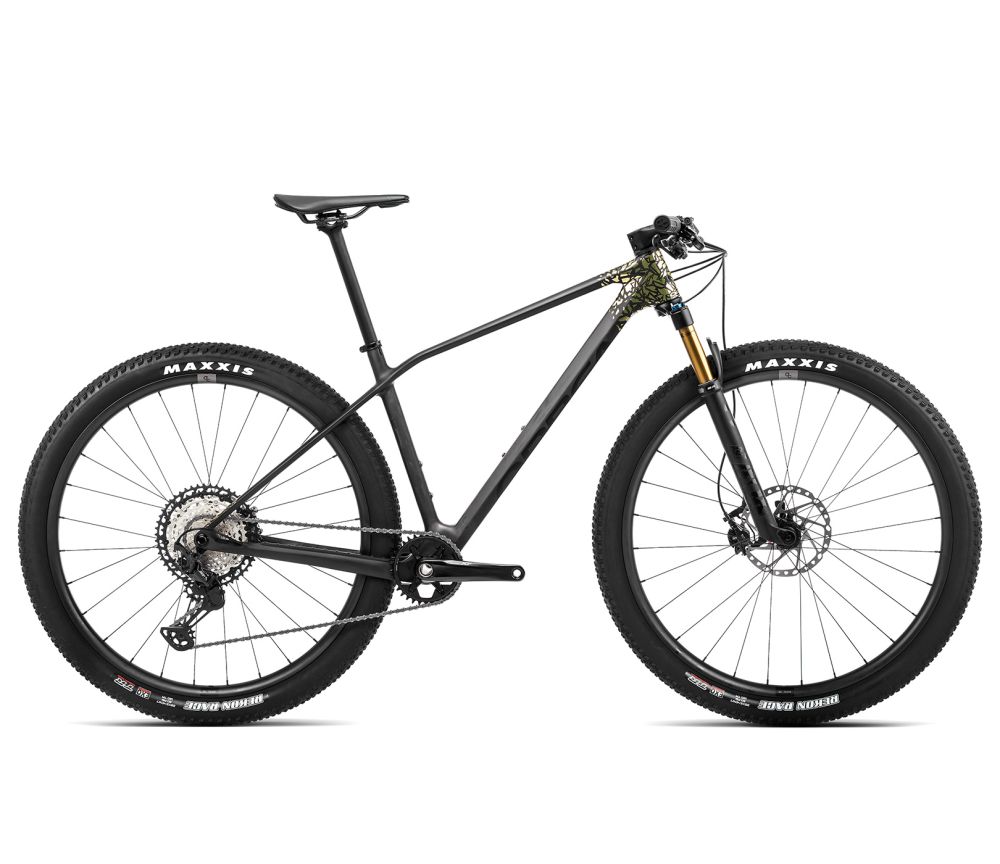 The Alma high-end series begins with the Alma M Pro, a carbon XC mountain bike available for $5,599. Each of the high-end Alma bikes has excellent components, with each one being better than the last.

Starting with the Alma M Pro which has an upgraded Carbon OMX frame, we have a Fox 32 Float SC Factory fork with 100mm of travel. This is the same fork that we’ll see on the Orbea Alma M Team. The bike also shares the same headset, handlebars, and stem as the Alma M Pro.

Much of the Shimano groupset on the Alma M Pro is identical to the Alma M20. That includes the rear derailleur, crank, and shifters. The cassette is a slight upgrade in the Shimano CS-M8100 10-51T, and Orbea has added a chain guide. Each of the high-end Alma M models comes with an Orbea Carbon OMR & OMX chain guide.

Disc brakes have been upgraded to the Shimano XT M8100 hydraulic disc set, while the seatpost is an OC XP10 Performance Carbon with micro tilt adjustment. 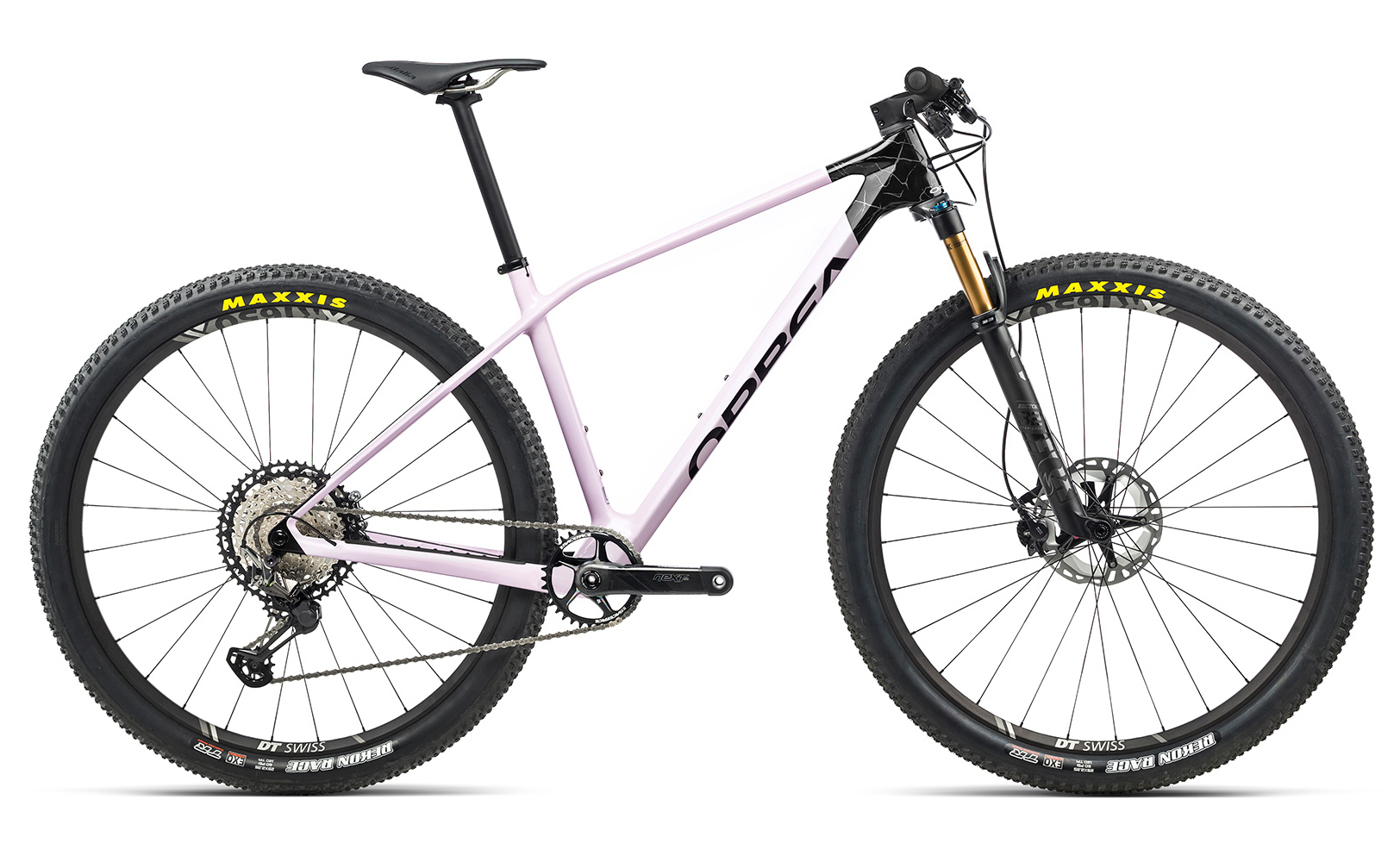 In the middle of the high-end models is the Alma M Team which you can get for $7,099. The M Team shares the same Fox 32 Float SC Factory fork as the M Pro, but it does feature a number of new parts including the Fox Transfer SL Factory Kashima dropper post.

Almost the entire groupset has been upgraded, including a Shimano XTR M9100 Shadow Plus rear derailleur and Race Face Next-SL 34T crank. The shifters also come from Shimano’s XTR groupset, while the cassette remains the same as the Alma M Pro.

The disc brakes have been upgraded to the Shimano XTR M9100 hydraulic disc set, as well as the Shimano M8100 chain. The addition of the dropper post and Shimano XTR components put the Alma M Team a solid step above the Orbea Alma M Pro. 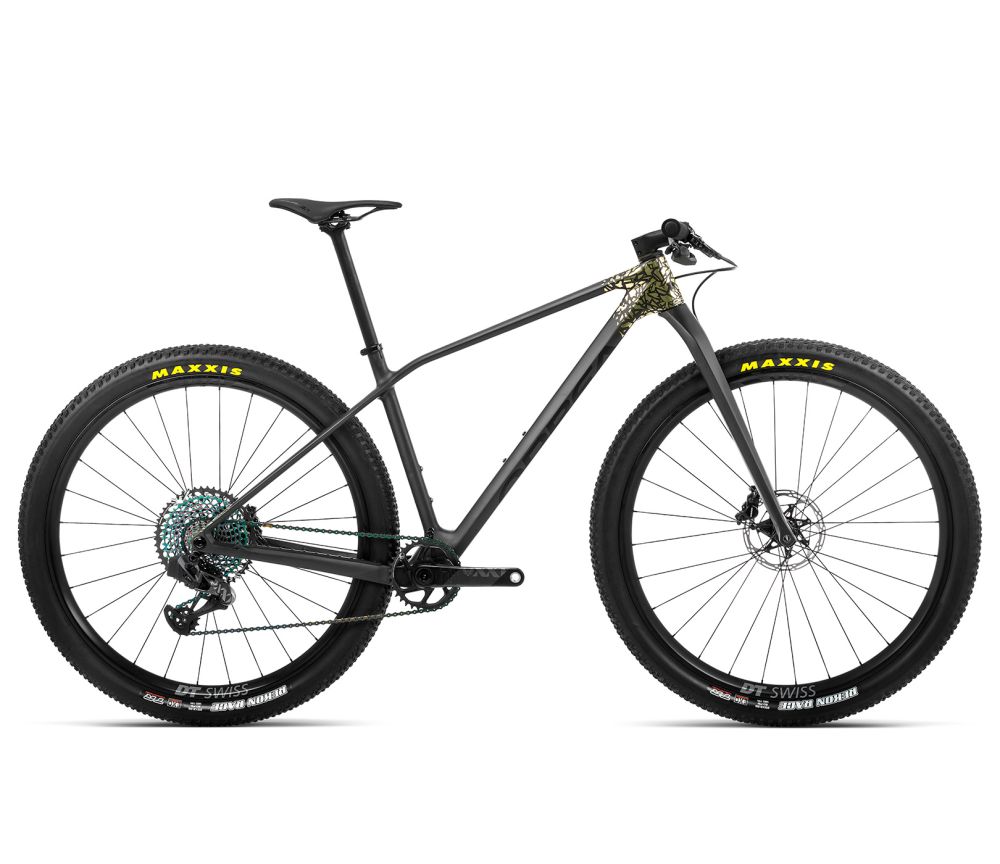 The best and most expensive  from the Alma XC range is the Alma M LTD which is available for $9,599. This impressive bike showcases upgraded components across the board. Starting with the fork, the Alma M LTD comes with an Orbea Spirit Rigid Carbon with 100mm travel.

Alma M LTD shares the same stem, handlebars, and saddle as the Alma M Team, while the seat post is identical to the Alma M Pro’s.

The rest of the components are exclusive to the Alma M LTD which features SRAM XX1 Eagle groupset. This includes the Eagle AXS rear derailleur, Eagle Dub Grey Boost 34T crank, Eagle AXS shifters, and XG-1299 Eagle 10-50T Rainbow cassette. This is the best of the best in the cross-country mountain bike world.

Finally, the brakes have been heavily upgraded to the SRAM Ultimate Carbon Stealth Black hydraulic disc set which is among the best in the business.

Here is a quick sizing chart to help you figure out what Alma fits your frame:

Orbea Alma is one of the most impressive series in all of mountain biking. Not only is each bike built with high-quality materials, solid groupsets, and classic XC geometry, but there are also 11 different models to choose from.

Riders of all abilities and experience levels can find an Orbea Alma, and they can also find one that fits their price range.

The most affordable Alma is available around the $1,500 mark. But if you’re ready to splash some cash, you can go all-in on the race-ready Alma M LTD.

The combination of XC frames, high-quality components, and Orbea’s proprietary technology makes the Alma series appealing to all types of XC riders.

Whether you are looking for your first mountain bike or you’re aiming for the top step of the podium, there is an Orbea Alma designed for you.