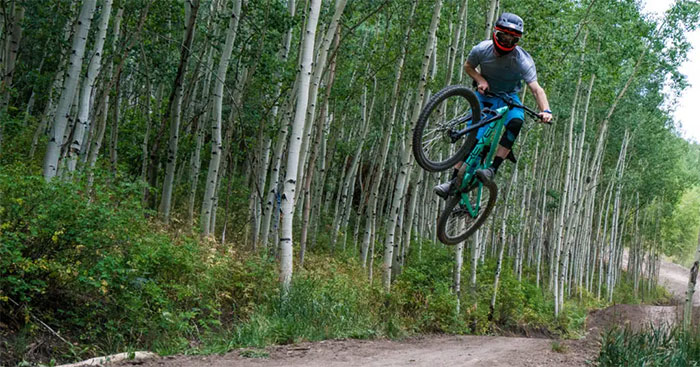 Revel Bikes set out to create the world’s best full suspension mountain bike. With a lineup of three incredible, carbon fiber mountain bikes plus a gravel bike, they’re certainly in the running.

A relatively new and environmentally-conscious company, Revel Bikes has made a quick impact on the mountain biking scene.

The Colorado-based company set out with lofty goals. Only a few years in, and the Revel Bikes’ team of industry professionals has created some of the best full suspension mountain bikes out there.

In this Revel Bikes review, we’re going to tell you what Revel Bikes are and who they’re designed for.

Overview of the Company

The story of Revel Bikes is certainly a unique one, backed by industry leaders and decades of experience in the cycling industry.

Founded in Carbondale, Colorado in 2016, Revel Bikes was created by Adam Miller, who also founded Borealis and Why Cycles.

Miller has a long list of accolades, many of which pertain to Revel Bikes, including one of Bicycle Retailer’s most influential people in the cycling industry under the age of 35 in 2016, and a BikeRadar Best of Show award at Interbike in 2013.

To lead Revel Bikes to what it is today, Miller enlisted the help of Jason Schiers (co-founder of Enve), Jeremiah Starkey (Rockshox, Trust Performance, Selle Royal), and Mike Giese and Chris Reichel (Why Cycles, Industry Nine).

Revel first launched the Rail and Rascal in its infancy. They have now expanded to a lineup of four bikes that are all carbon fiber frames that use the Canfield Balance Formula (CBF™).

Finally, Revel also prides itself as an environmentally-conscious business. They have reduced their cardboard waste by shipping their bikes in reusable cases and removing plastic utensils from their company break room.

Revel also chooses manufacturers that recycle scrap carbon and minimize or eliminate the use of harsh chemicals in the manufacturing process.

With the goal of building the best-ever full suspension mountain bikes, Revel bikes have a number of intricate features that stand out amongst the industry leaders.

Perhaps the more unique feature of Revel Bikes is the Canfield Balance Formula (CBF™). It’s a system that decouples the suspension system from the drivetrain, maximizing pedaling efficiency regardless of terrain, according to Revel.

Revel also uses internal routing and full carbon tubes molded into one piece inside its carbon fiber frames. According to Revel, you can route the entire frame in about a minute.

That is among the best we’ve ever heard. Molded guides are used on each cable to help ease the stress of replacing cables or brakes lines.

Depending on the bike, Revel uses Japanese Toray T700 and T800 fiber, specifically in 30/60-degree fibers. That is to optimize their carbon fiber frames and create the strongest and stiffest tubing possible whilst simultaneously using less material.

The integrated Revel chain guide is a final feature unique to Revel Bikes. It’s generally an underrated feature in the mountain bike world. This simple guide will keep your chain in place, is easy to adjust, and is even optimized around SRAM DUB cranks and bottom brackets.

Revel Bikes’ ultimate goal is “to build the absolute best full-suspension mountain bikes–EVER”. Using a mix of tried and true and unique, once experimental materials and manufacturing practices, Revel Bikes has created a strong lineup of full suspension, carbon fiber mountain bikes, plus, their very own gravel bike. 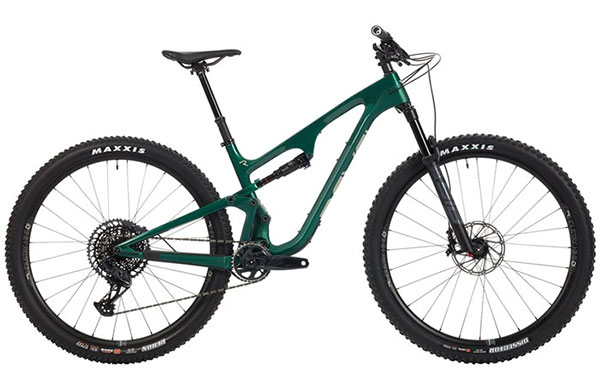 The Revel Ranger is the lightest bike in the Revel mountain bike lineup. It is designed to go up as well as it goes down. The ultra-light frame is a full pound lighter than the Rascal. It has the climbing feel and ability of a race-ready cross-country bike.

In fact, the Ranger is designed for racing, but can also be used for climbing and exploring on local trails.

Available in four different sizes, the Ranger is designed for riders across a wide range of abilities.

See the Ranger Models on evo 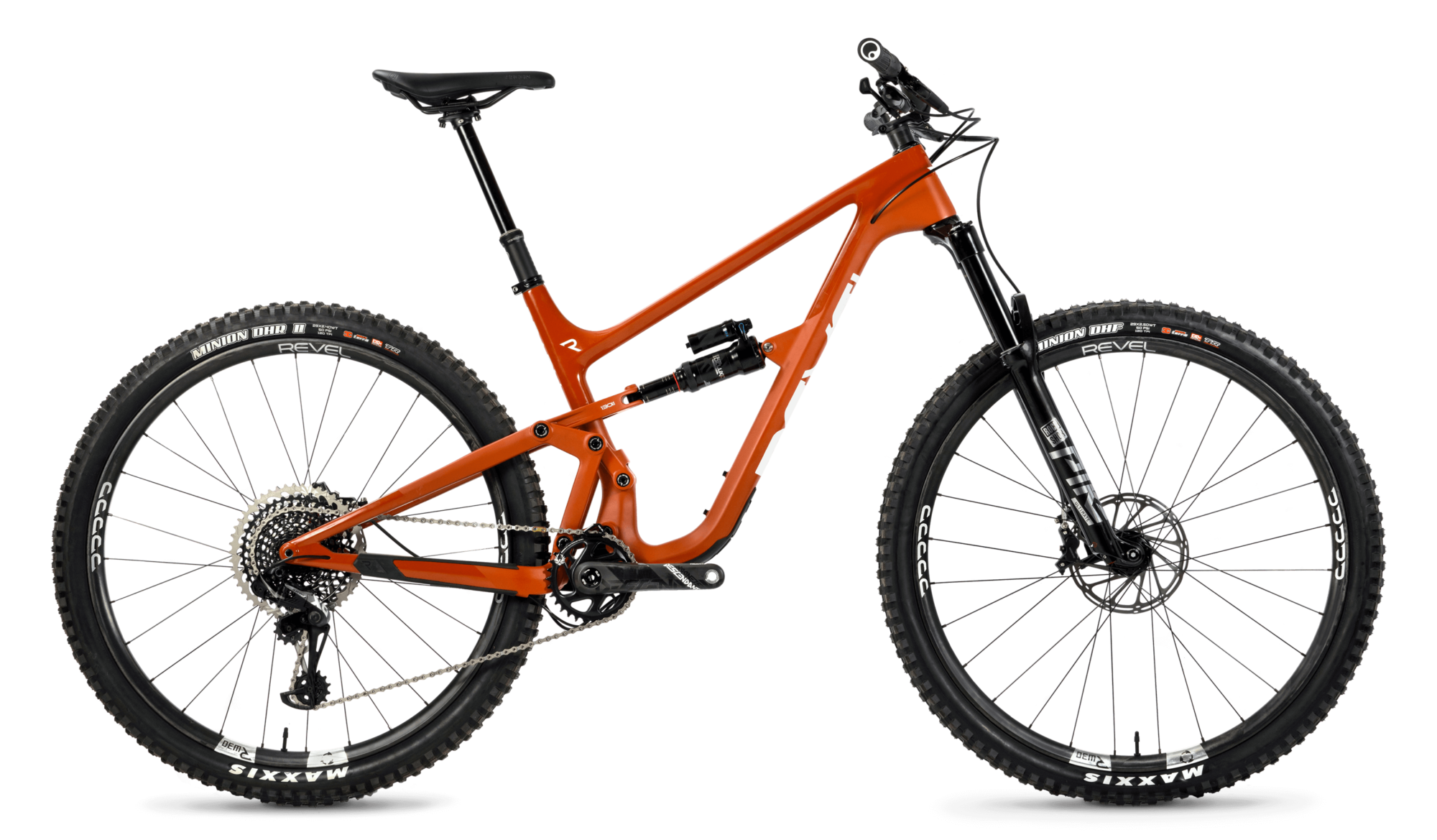 One of the original Revel Bikes, the Revel Rascal is the bike designed for fast climbing and gnarly trail-shredding. With more suspension travel than the Ranger, the Rascal can handle much more technical trails while being even more forgiving.

On the Large frame size, the Rascal has an effective top tube length of 633mm, a seat tube angle of 75 degrees, a head tube angle of 66 degrees, and a wheelbase of 1220mm.

Overall, it is a bit shorter up top, and a little lengthier on the bottom to give you that extra bit of control while also increasing stability over the gnarly stuff.

Between the differing tires widths and compounds, you’ll certainly feel a handling difference in the Rascal that is built for much more challenging terrain than the Ranger.

See the Rascal Models on evo 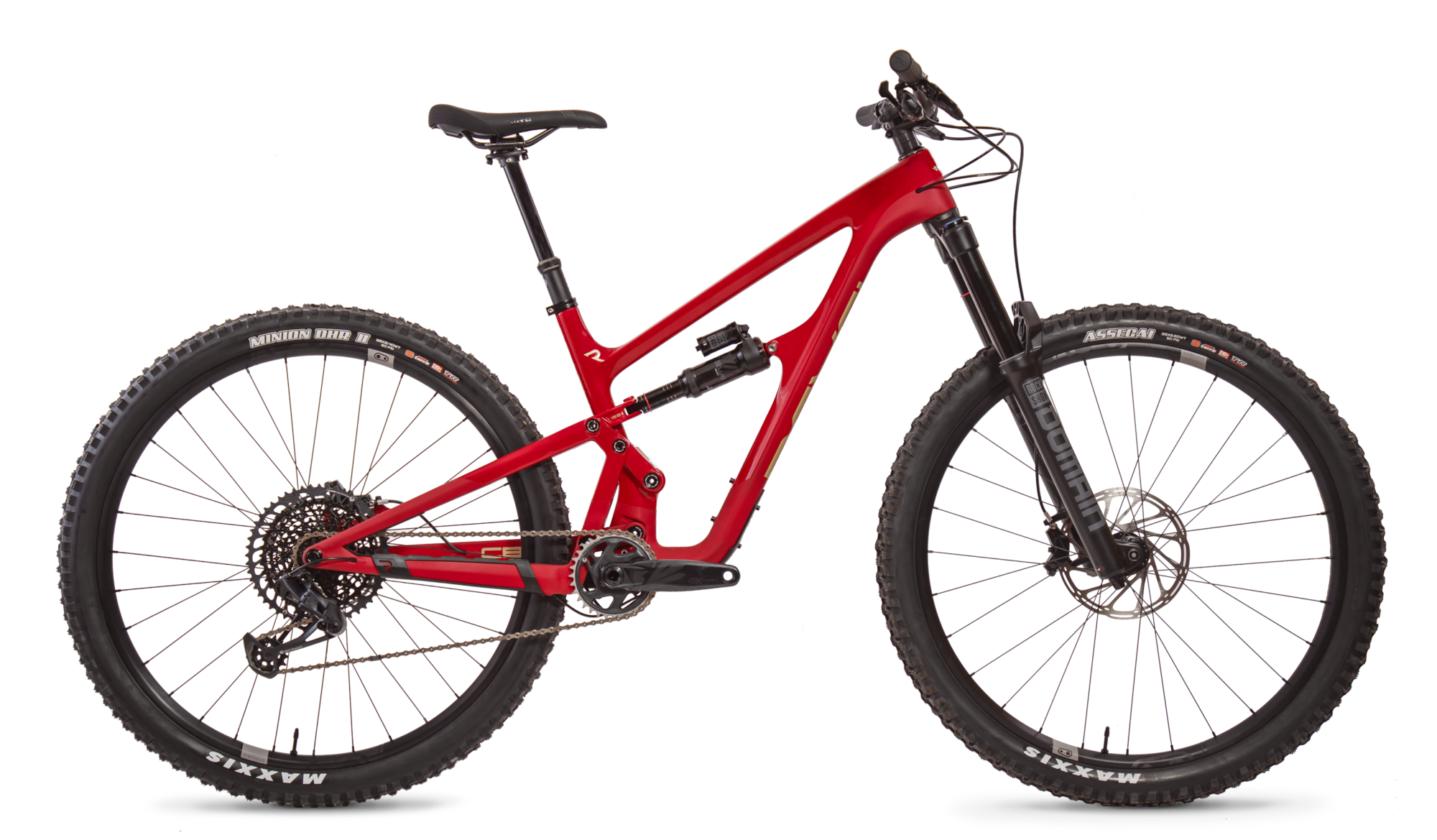 The Rail is Revel’s most extreme mountain bike designed for big jumps, shredding berms, and comfortable climbing. That last part may be surprising for a bike like this. That’s what Revel set out to do: create a capable downhill bike that is still lightweight and efficient on climbs.

On the Rail are the smallest wheels of the Revel lineup, with 27.5” wheels on the front and rear.

The Large frame size of the Rail includes an effective top tube length of 642mm, a seat tube angle of 75 degrees, a head tube angle of 65 degrees, and a wheelbase of 1230mm. All in all, it’s incredibly close to the Rascal in these measurements.

The wheels and suspension make the biggest differences when it comes to overall handling. With the GX Eagle kit, the Rail comes with a RockShox Super Deluxe Select Shock to help cushion those landings on the trail.

The stock Revel Rail comes with a GX Eagle kit and includes the RockShox Lyrik Select 170mm fork with 27.5” Industry 9 S Boost wheels. The tires are the Maxxis Minion DHF 2.5” EXO+ (front) and Maxxis Aggressor DHR 2.3” EXO+ (rear) tires. These are slightly different from the tires on the Rascal.

See the Rail Models on evo 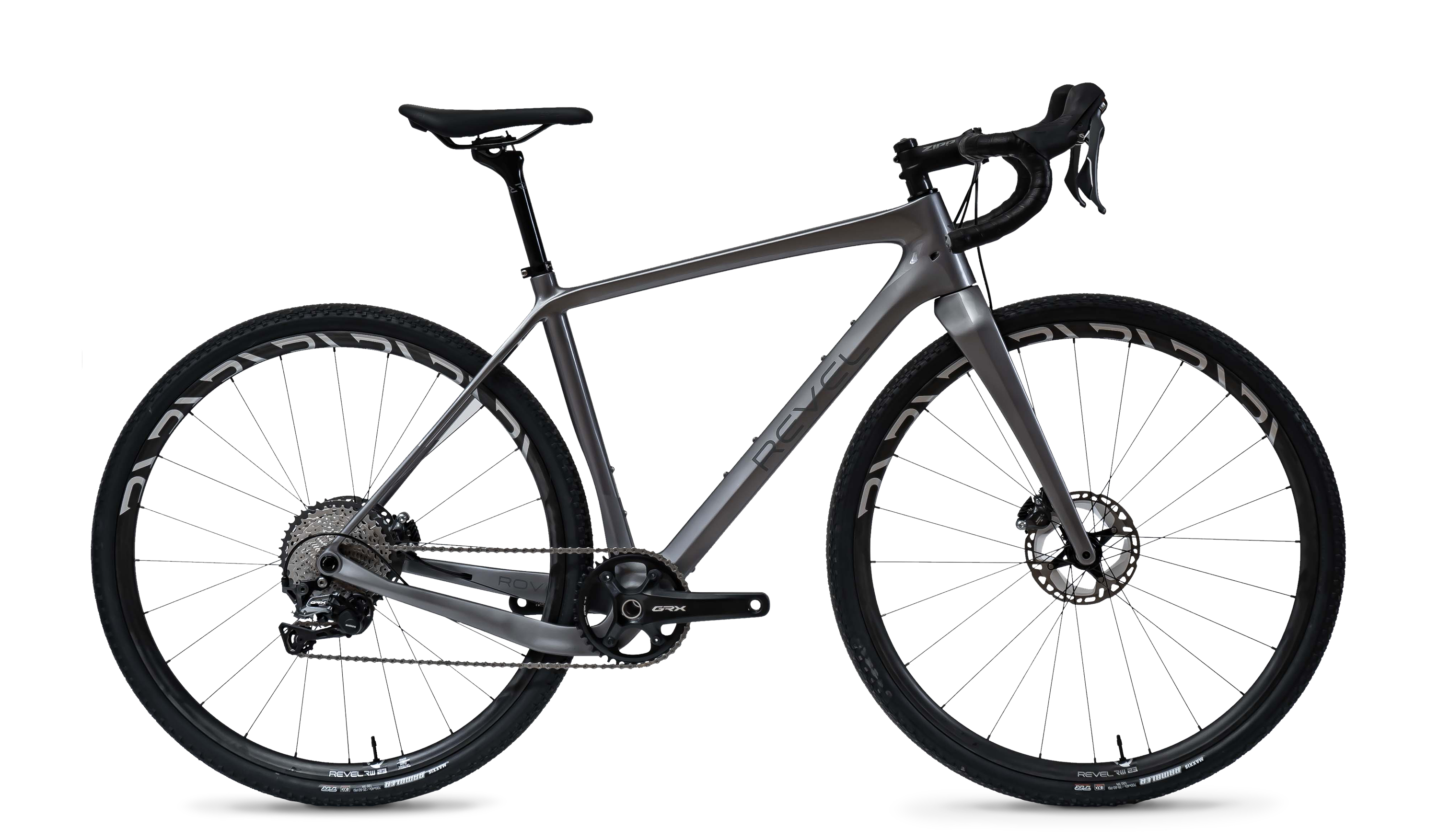 The biggest outlier in the Revel bike lineup is certainly the Rover. Revel Rover is a high-end, modern gravel bike with specially shaped carbon fiber that optimizes ride quality over everything.

Despite the 700c distinction, the Rover’s wheels are still 27.5 compatible, with enough clearance for 700x50mm, 27.5×2.1 tires. Revel added to the XXL to the Rover lineup, giving us five different sizes to choose from.

The most affordable Revel Rover comes with a SRAM Rival kit and includes the Revel Gravel Fork and 700c Industry Nine GRCX wheels. Maxxis Rambler 700x40c tires are the first pair on this list that match in size, and finally, there is the SRAM 11-42t Black cassette that will limit your climbing much more than the full suspension mountain bikes above.

Revel Bikes has the goal of leading the way in the creation of full-suspension mountain bikes. With three options to choose from, from the casual Ranger to the extreme Rail, Revel has something to offer for every level of mountain biker. Add to that their carbon fiber gravel bike, the Rover, and there are a lot of high-end bikes to choose from at Revel.

What kinds of bikes does Revel make?

Where does Revel make their bikes?

Revel Bikes is based in Carbondale, Colorado, but has outsourced their bike frame manufacturing to China and Vietnam.

How much is a Revel Rascal?

There are four different kits that you can buy with the Revel Rascal. Each with different forks, shocks, wheels, and tires. The cheapest is the Rascal with GX Eagle kit which costs $5,899.

How much does a Revel Ranger weigh?

When was Revel Bikes founded?

Revel Bikes was founded in 2016 by Adam Miller in Carbondale, Colorado.

When Revel Bikes was first founded in 2016, their group of experienced industry leaders set out with the lofty goal of creating the best full-suspension mountain bikes.

Their patented Canfield Balance Formula (CBF™) technology stands out the most. No other major bike manufacturer uses it – you can’t find this technology anywhere else.

This team of riders and business people knows their stuff. They are based in Carbondale, Colorado, after all.

With intentional designs, sustainable processes, and some of the best materials in the business, Revel Bikes are truly something to behold in the world of full suspension mountain biking.

See All Revel Bikes on evo