Track cycling certainly looks odd. Riders are racing around a short oval with steep turns and doing it all without brakes. They sprint at 40mph and swing up and down the banking while looking over their shoulder.

There’s even one race – called the Madison – where riders grab the hand of their partner and ‘sling’ them into the race. It looks crazy!

One of the lesser-known cycling disciplines, track racing has a rich history dating all the way back to the 1800s.

Today, track cycling has reached heights at the peak of sports with events in the Olympics and the UCI World Championships.

In this article, we’ll explain what track cycling is, where you can find it, and what makes track bicycles so unique. 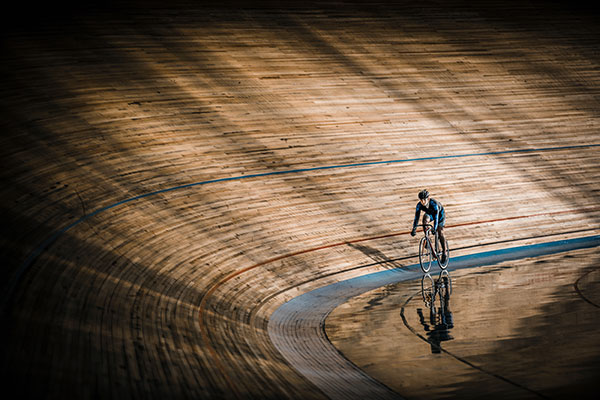 Track cycling is a unique cycling discipline. It takes place on a closed track called a velodrome, where cyclists race around on fixed gear bikes. Let’s start with the venue.

A velodrome is a purpose-built cycling track usually made of wood or concrete. They can be built indoors or outdoors, with most built outdoors because of the savings in cost.

In order to house an indoor velodrome, you need to create an entire building and facility around it.

Velodromes vary in length from 133 to 333 meters for most tracks (145 to 364 yards). They’re measured in this way because it makes it easy to count the number of laps for a 10km or 20km race. The defining feature of a velodrome that scares most cyclists is the steep banking in the corners.

Velodromes are cambered, which means that they are banked in a way that assists the rider as they turn through the corner.

Track cycling always turns left (counterclockwise) around the velodrome. The banking helps riders lean to their left as they go flying through the corner.

The steeper the banking, the higher the minimum speed is required to stay on the track. At low speeds, your tires are at risk of slipping down the banking. There’s a whole lot of physics behind this that I won’t dive into in this article.

Whether it be public roads, local parks, or shared forest areas, you are always sharing space with someone else. Track cycling, on the other hand, has its own dedicated space. 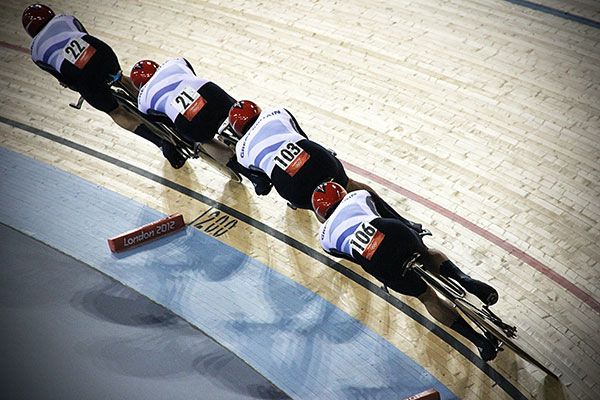 A velodrome doesn’t take up a lot of space, especially smaller tracks. That means that you can put them almost anywhere, including busy cities.

While the roots of track cycling are in Europe – the oldest velodrome is in Preston Park in the UK – you can find velodromes all around the world from the United States and Mexico to France, Jamaica, Malaysia, and China.

Racing has always been at the heart of track racing, as the allure of speed is undeniable on the cambered corners and smooth track.

Unlike road racing, there are a number of different races run on the track, including the Scratch, Points, Elimination, Madison, Keirin, Individual Pursuit, Team Pursuit, Sprint, Team Sprint, Kilometer, and 500m time trials, and Omnium.

Here’s a quick breakdown of the track races that you will see at the Olympics.

In addition to mass start track racing, there are a number of time trial events. These include the Individual and Team Pursuits, Kilometer Time Trial (men) and 500-meter time trial (women), and the Team Sprint.

The most unique and widely-known track cycling time trial – and also one of the most coveted records in cycling – is the Hour Record.

Many of the sport’s greatest names have attempted the Hour Record including the great Eddy Merckx.

The race is simple: complete the furthest distance possible in one hour on the track. The UCI (professional cycling’s international governing body) has stepped in recently to set technical regulations and requirements on the effort, but otherwise, the Hour Record is as simple as it gets. 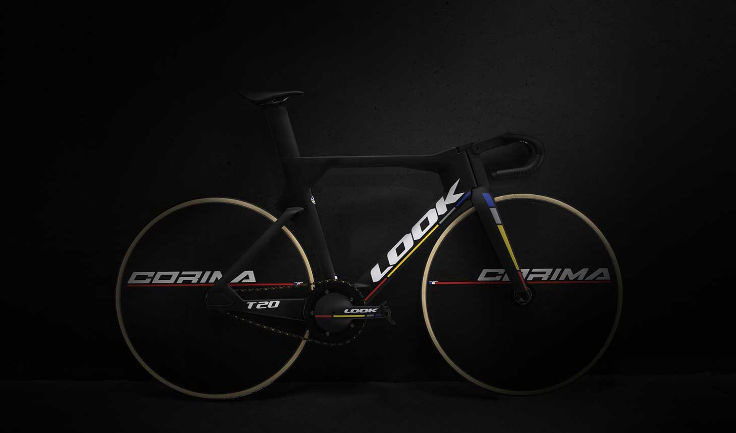 Track bicycles are one of the most interesting types of bikes because they instantly blow peoples’ minds. They have no brakes!

The only way to stop a track bike is to let off the pressure, or reverse the pressure on the pedals so that the cranks turn slower and eventually come to a stop.

Experienced ‘fixie’ riders will actually stop and skid the rear wheel to come to a quick stop, although we’d never recommend doing this on a track bike because of the narrow and fragile tires.

Track bikes have a similar shape to road bikes. They are lightweight, aerodynamic, and designed for straight-line speed.

The cornering that you do on a velodrome has more to do with the steep banking of the corners rather than actually turning your front wheel.

Thus, you won’t need much grip on your tires for tight cornering, as opposed to road bike tires which are designed to grip in the rain, on variable pavement, and at high speed on off-camber descents. Track bikes are much simpler because they are confined to the velodrome.

With a fixed gear bike, it’s as simple as it sounds. The gear is fixed, meaning that there is no flywheel, derailleur, or multiple cogs. Instead, there is one front chainring and one rear cog.

It is quite a laborious process to change gears on a track bike, involving removing the rear wheel, changing the cog or chainring and reinstalling the wheel, and remounting the chain.

Once you’ve practiced it a few times, changing gears isn’t too difficult, but it’s much more work than moving a shift lever.

Want to see more track bikes? Look and Cervélo offer some options. While they aren’t cheap, they definitely are a sight to see. 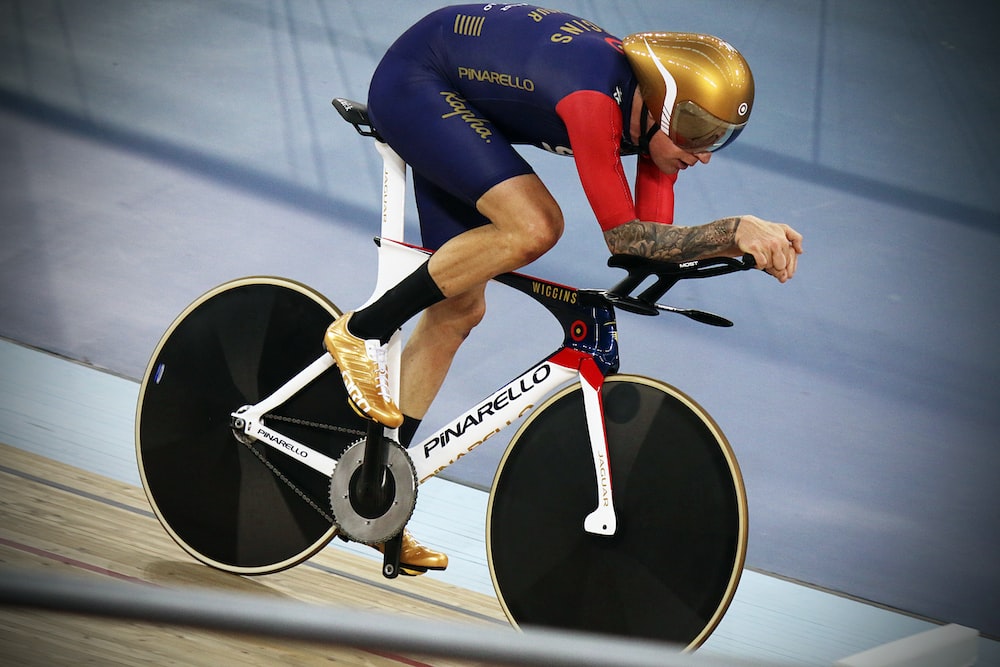 Track bikes have drop bars that are usually narrower than road bars. Track bars can measure as narrowly as 33mm wide, for example, while road bars will be 42mm or 44mm wide.

In terms of frame geometry, track bikes typically have a shorter reach and shorter top tube compared to road bikes. They also have a higher bottom bracket which helps increase pedal-to-ground clearance for pedaling on the banked corners.

The different geometry and build of a track bike make them quite stiff and better with handling at high speeds.

Track cycling is all about racing, with little worry for cornering, climbing, descending, or anything else that you’d need to do on a road bike.

Track bikes are built for speed, and their lightweight carbon frames are designed exactly for that.

You’ll also find different wheel styles at the velodromes, included tri-spokes, thick spokes, and full-on disc wheels. These wheels are extremely aerodynamic, though they are significantly worse in corners.

However, in the enclosed spaces of a velodrome, these wheels are commonly used because the racing is much less affected by road conditions and weather.

There is a whole other category of track bikes involved in time trials and the Hour Record – these are aerodynamic time trial track bikes.

While the frames of these bikes are almost identical to other track bikes, aero TT track bikes often have customized aero extension handlebars and double-disc wheels.

These are the bikes that you see in the Individual and Team Pursuits, as well as the Hour Record. You’ll see track riders with their forearms pressed together, their hands out in front of their bike, and their head tucked tightly into their shoulders. This creates an extremely aerodynamic position that is as fast as possible.

What is the point of track cycling?

Track cycling is a unique form of cycling that is all about speed. Velodromes are an extremely spectator-friendly venue, and they are thrilling to ride and race around for cyclists.

Track cycling is also unique because it doesn’t take place on public roads, in a park, or through a mountain bike trail. Velodromes have a small geographical footprint and can fit into many cities and small towns, as well as being indoor or outdoor.

How fast do track cyclists go?

How do you become a track cyclist?

To become a track cyclist, all you need is a track to ride on and a fixed gear bike. Many velodromes (cycling tracks) have Track Cycling 101 classes that you’ll need to complete in order to participate in official training rides or races. These classes will teach you how to ride on the steep banking of the velodrome, how to handle yourself in a pack of cyclists, and how to safely decelerate on a fixed gear bike (which doesn’t have brakes!)

What is a cycling track called?

A cycling track is called a velodrome, which is usually an oval shape with banking in the corners. Velodromes vary widely in size (i.e. length of the lap), with the smallest velodromes being 133m around, and the longest being 333m or 400m long.

Why do track cyclists go slow?

Track cyclists will often go slowly – called a track stand – as a tactical maneuver during a sprint race. These are races where two cyclists face off in a three-lap race from a standing start, which makes it advantageous to be the second rider in line (and in the draft) when the sprint starts.

How much does a track bike cost?

The most affordable track bikes will be aluminum fixed gear bikes which you can find for $300-500. Race-ready carbon frames start at $600-800, while higher-end race frames will cost $1,000-2,000. Because of the fewer components on a track bike (i.e. no derailleurs, shifters, or brakes), they cost significantly less than road and mountain bikes across the board.

Track cycling is truly one of the purest and most entertaining forms of cycling.

There are few other moments in cycling that will leave your jaw on the floor like a 75kph shoulder-to-shoulder track sprint, a lightning-fast exchange in the final round of a Team Pursuit, or a chaotic sea of Madison slings at the Olympics.

Held on velodromes with fixed gear bikes, there is no other cycling discipline like track racing. While the sport may be intimidating at first, riding on a velodrome is a fun skill that is easy to learn in a couple of short track sessions.

Track bikes can be surprisingly affordable and easy to maintain. That makes them reachable for pretty much every cyclist. But it’s up to you if you want to search for the nearest velodrome!