Rad Power Bikes has added a brand-new model to their unique collection – RadMission. It is a cheap, light, and good-looking city commuter intended for young people on a mission and those who feel that way.

Rad Power Bikes is one of the biggest manufacturers of electric bicycles in the USA. They made a name for themselves with quirky e-bikes like RadMini, RadRover, RadCity, and others. The time has come to upgrade their offering with the raddest bike so far — RadMission.

Unlike their other models, RadMission looks pretty ordinary and down to earth. At first glance, it looks like an “analog” bike, until you spot the battery and the rear hub motor. Rad Power’s bikes are known to be some of the cheapest around, but they’re notorious for being in the heavyweight class. RadMission is about to change that — it is 30% lighter than all other company’s models and 30% cheaper than the average. The weight and price savings have mostly been achieved by changing the electrical components. Instead of a 750W motor, RadMission is powered by a 500W (250W in the EU) motor and a smaller and lighter 504Wh battery (instead of 672Wh).

The innovative battery pack comes with a key and a lock, so it stays secured on the bike. You can charge it on and off the bike, whatever is more convenient for you.

The lock has three positions—Locked ON, Locked OFF, and Unlocked. Therefore, you can leave it on the bike in the Locked OFF position if you don’t want anyone to tamper with your bike, but you also can’t be bothered to take it off and carry it with you.

Instead of an LCD display found on other Rad models like RadWagon or RadRover, RadMission features a more basic LED control panel.

This straightforward panel lets you turn the bike on and off, turn the lights on and off, control the pedal-assist level, and track your battery charge.

Does that mean RadMission is weaker than other Rad bikes?

Perhaps, but it is also lighter, so you won’t feel the difference in the pull that much. Plus, even though its electronics are slimmed down, the range has remained the same. According to the company, you can expect 25–45+ mi (40–72+ km) of pedal assist and throttle range.

Based on the testimonies of riders, RadMission performs well in all weather conditions and on all types of terrain. The electronics are completely sealed and weatherproof, so you can ride it even when it’s raining cats and dogs. The motor can deal with the hills in San Francisco without big hiccups, even though it is weaker compared to other Rad models. However, the single-speed drivetrain means that you will need to use more power from the system and thus drain the battery more quickly. RadMission is built around a 6061 aluminum frame with a rigid steel fork. That makes it strong and durable, able to handle the stress and abuse that comes with daily exploitation on city streets.

The steel fork makes the ride comfortable, but the tires add to the comfort as well. Namely, the Kenda Kontact 27.5×1.95″ tires are pretty wide, so they can deal with curbs, potholes, and cracked asphalt. They also feature a puncture-resistant liner and reflective sidewalls, so they will protect you from flats and make you more visible from all sides.

A Modern and Practical Class 2 E-Bike

Like all other Rad Power’s models, this is also a Class 2 e-bike. That means you can ride it in pedal assist and throttle modes and expect a 20 mph maximum assisted speed.

The idea behind this bike is to revolutionize urban commuting, especially for millennials who shy away from conspicuous electric bikes that many consider to be an eyesore. It’s not necessarily made for hauling lots of cargo, but to get you from point A to point B quickly and without fuss.

It is easy to carry up a flight of stairs for most people, it’s fun to ride, it looks awesome, it’s available in five attractive colors, and you can upgrade it with numerous accessories that will make it unique and your own. 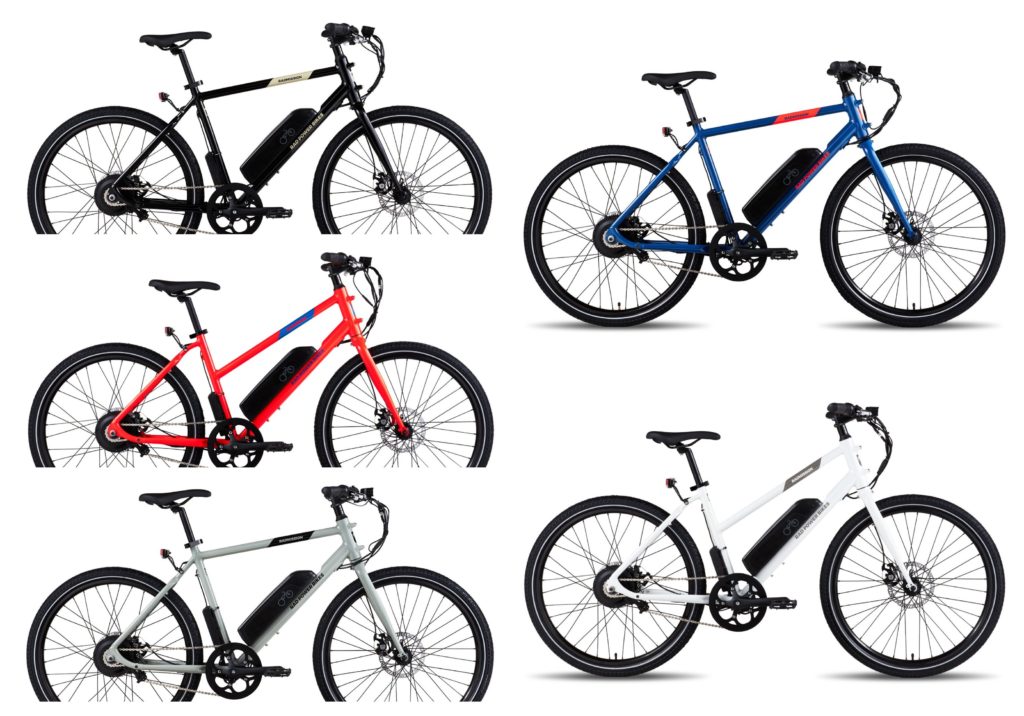 Rad Power has big expectations from RadMission, and it seems they’re not wrong. Mike Radenbaugh, the Founder and CEO of the company, said in a recent blog post:

“I’m really hoping that this is the first ebike for people who are just waking up to the fact that they don’t need a car to survive anymore. Bikes like these can get you from Point A to Point B, cut down on emissions, save money on gas, and ultimately change the entire transportation game.”

Compared to other Rad Power models, RadMission can be considered to be an entry-level model. This is a single-speed bike, so it’s super-easy to ride and even easier to maintain.

It’s fast on the pavement thanks to the narrow 27.5 x 1.95″ tires and has modern and powerful mechanical disc brakes that are a necessity for dynamic urban riding.

However, you need to keep in mind that the single-speed drivetrain comes with certain shortcomings. It’s simple to maintain but it’s not suitable for very long and sustained climbs. Even though you could use the throttle or a high pedal-assistance level to get over a hill, you will drain the battery rather quickly.

Therefore, RadMission might not be the best choice if you live in a very hilly area.

Does It Have Any Accessories or Extras? At this price point, you will not get fenders, but you can certainly fit them yourself later on. However, you will get battery-powered front and rear lights. The rear light also acts as a brake light, so it activates whenever you engage the brakes. A feature you’ll be happy to have in the busy afternoon traffic.

RadMission also features an adjustable kickstand attached to the rear of the bike, that will make quick stops much easier.

Even though it does not come with many stock accessories, it abounds in eyelets throughout the frame, so you can modify it any way you’d like.

We recommend fitting a front and rear rack if you plan to carry a lot of stuff with you. You can also fit a child seat on the rear rack and use RadMission as a proper car replacement.

The Perfect Choice for E-Bike Beginners

If you are just making your first steps into the e-bicycling world, RadMission is the perfect bicycle for you, says Mike Radenbaugh:

As mentioned above, RadMission is available in five attractive color combinations, which is not the case with other Rad Power bikes. These are:

It’s pretty exciting to see that Rad Power is continuing to improve their lineup by making it cheaper and more accessible, instead of more expensive and more luxurious. RadMission is RADically different than the company’s previous models, but I feel that all of the changes were made in the right direction. The end result is an attractive no-frills urban workhorse that is certain to get more people out of cars and public transportation and enable them to start pedaling more.

This Article Has 2 Comments